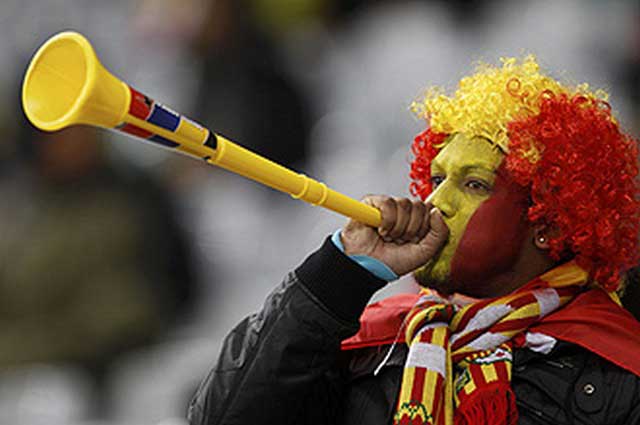 Letter by Andrew Choy on July 1: “I was in South Africa last month prior to the start of the current Fifa World Cup football tournament which the country is hosting. The joyful atmosphere in the streets was marred by the pestilential din made by a native trumpet, the vuvuzela. I was appalled by the inconsiderate, incessant blaring and I’m relieved it’s not found anywhere else.

“I hope Singapore will steer clear of this headache-inducing, eardrum-shattering, uncivil instrument and that the authorities will nip in the bud any bid to turn it into a trend. In short, ban it from all event venues here.”

“Of late, there have been numerous complaints relating to noise pollution.

“Recently, there were reports that vuvuzelas, the South African trumpets made famous by the World Cup, will be introduced here soon.

“Do we need an additional tool to inflate the already intolerable noise level in our compact city?

“I recently heard an irritating noise, which sounded like a vuvuzela, from a neighbouring block in my estate. The blaring was disgusting and it prompted me to pen this letter.

“With its capacity to create a noise level of up to 120 decibels, and potentially cause harm to a person’s hearing, this horn should not be allowed to reach our shores.

“If vuvuzelas are allowed freely into Singapore, many HDB dwellers will have sleepless nights if some insomniacs start blowing their vuvuzelas.”

“I was in Singapore recently and left with many take-aways:

“My trip to Singapore was most educational indeed. I have no doubt that this amazing country – where amoebae surrender what little brains they have to their government – will have a very bright and rosy future.”

NOTE: For those slow to catch on, Memore Graymatters is a figment of my imagination.