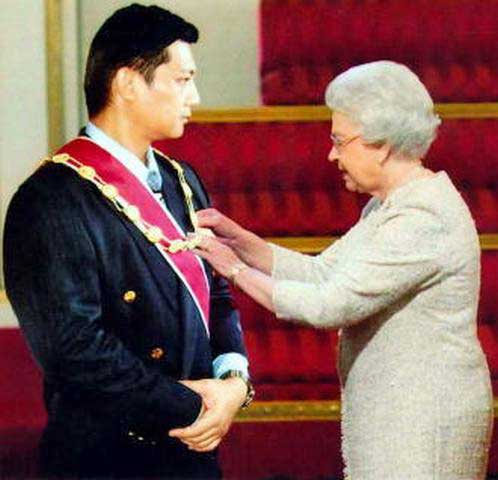 Jeffrey Wong Su En is a Chinese medicine man from Sabah, north Borneo, who goes around calling himself “doctor.” He is also a Sabah state Democratic Action Party member.  He got screwed recently for claiming to be Sabah DAP’s youth chief.

Wong apparently enjoys being reamed. Recently he knighted himself using Photoshop, took up an ad in the press to announce the knighthood, and sent press releases to the media. (He obviously had no idea about the knighting ceremony – knighthoods are not conferred by grandma sticking a medal on your chest.)

British officials have refuted his claim that he had been conferred the Knight Grand Cross by the Queen in conjunction with her recent birthday.

“We can confirm that we have no record of any honor having been conferred at any time by the British government on Jeffrey Wong Su En,” said the British High Commission.

Wong then said that the knighthood was issued by Papua New Guinea in conjunction with the Queen’s 84th birthday celebrations.

When the public reacted Wong then issued a statement saying “This is a personal matter. It has nothing to do with the public, and it is becoming politicized.” Oh yeah? Why the press ad and the press releases then?

By the way, the knighthood investiture ceremonies for the 2010 birthday honors list have not yet taken place.

I’ve been told that there are people whose IQ is the same as that of their shoe size.

I’ve always insisted that this is not possible.