A Christian Who Walked the Talk 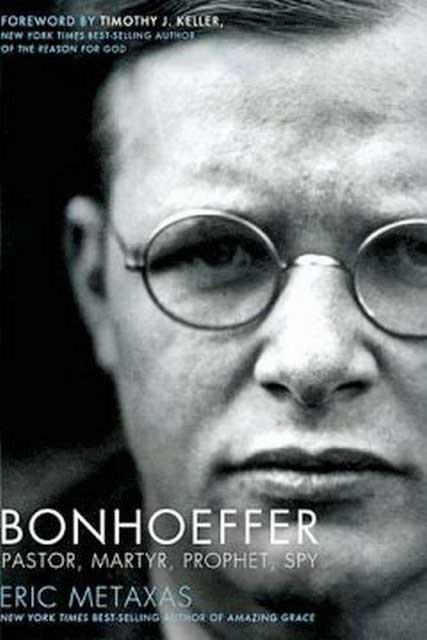 Bonhoeffer: Pastor, Martyr, Prophet, Spy by Eric Metaxas is a must-read for people who profess themselves to be Christians.

In April 1933, during the early months of Nazi rule in Germany, a new law banned anyone of Jewish descent from government employment. German churches, which relied on state support, now faced a choice: preserve their subsidies by dismissing their pastors and employees with Jewish blood – or resist. Most Protestant and Catholic leaders fell into line, visibly currying favor with the regime or quietly complying with its edict.

Joseph Loconte, a senior lecturer in politics at the King’s College in New York City and the editor of The End of Illusions: Religious Leaders Confront Hitler’s Gathering Storm, in reviewing the book in The Wall Street Journal wrote that such ready capitulation makes the views of Dietrich Bonhoeffer, a young Lutheran theologian in Hitler’s Germany, all the more remarkable.

Within days of the new law’s promulgation, the 27-year-old pastor published an essay titled The Church and the Jewish Question, in which he challenged the legitimacy of a regime that contravened the tenets of Christianity. The churches of Germany, he wrote, shared “an unconditional obligation” to help the victims of an unjust state “even if they [the victims] do not belong to the Christian community.” He went further: Christians might be called upon not only to “bandage the victims under the wheel” of oppression but “to put a spoke in the wheel itself.” Before the decade was out, Bonhoeffer would join a conspiracy to assassinate Hitler and pay for such action with his life.

In Bonhoeffer: Pastor, Martyr, Prophet, Spy, Eric Metaxas tells Bonhoeffer’s story with passion and theological sophistication, often challenging revisionist accounts that make Bonhoeffer out to be a “humanist” or ethicist for whom religious doctrine was easily disposable.

Since the 1960s, some of Bonhoeffer’s admirers have seized upon a phrase from one of his letters—”religionless Christianity”—to argue that he favored social action over theology. In fact, Bonhoeffer used the phrase to suggest the kind of ritualistic and over-intellectualized faith that had failed to prevent the rise of Hitler. It was precisely religionless Christianity that he worried about. After a 1939 visit to New York’s Riverside Church, a citadel of social-gospel liberalism, he wrote that he was stunned by the “self-indulgent” and “idolatrous religion” that he saw there.

As the storms of hatred raged in Germany, Bonhoeffer moved beyond “confession” – that is, preaching and writing – and into rebellion. By the summer of 1940, he was recruited by Admiral Wilhelm Canaris and others as a double agent for their conspiracy against Hitler.

It was a bizarre role for a religious man, and a hitherto loyal German citizen, to play.

Bonhoeffer drew deeply from historic Christianity, especially its emphasis on the love of God expressed in the life and teachings of Jesus.

After a failed assassination attempt on Hitler in 1943, Bonhoeffer was arrested on charges of assisting Jews and subverting Nazi policies. Two years later, in early April 1945, he was executed at the Flossenburg concentration camp in Bavaria.

Bonhoeffer stood up for what he believe in.

They say men and women of faith can change the world.

But the world will not change if these same men and women of faith do not walk the talk.

Christianity is cheap and easy nowadays. It has been reduced to a mega show business with many church services conducted like rock concerts, complete with worship leaders who are paid professionals, accompanied by the latest high tech multimedia equipment.

In the past Christians made sacrifices and suffered persecution for their faith.

If Christians have to live like their counterparts did in the past, how many who profess themselves to be Christians today would still be Christians?