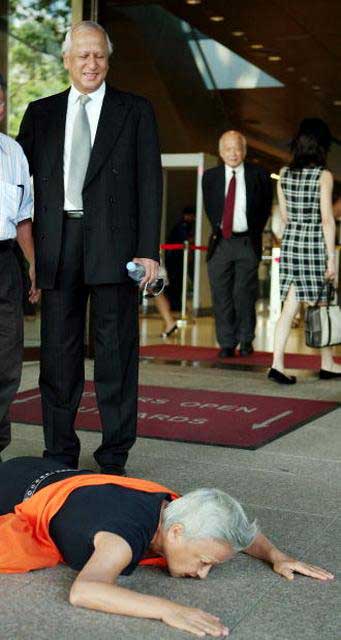 Bachoo Mohan Singh looking at his sister doing her thing.

Ivy Kaur – all Sikh women are given the last name Kaur – is always a bit of a character. Every time I visit her Bollywood Veggies, Mrs Ivy Singh-Lim, as she prefers to be known, could be seen ranting loudly away about something or other – sometimes complete with Hokkien profanities. The intense woman is married to Lim Ho Seng, the former CEO of NTUC Fairprice and is credited with turning around the fortunes of Netball Singapore during her tenure as president from 1992 to 2005.

On July 15, after her elder brother was acquitted by the Court of Appeal for making a false claim, agitated Ivy, arms pumping and in a raised voice, criticized the media for what she deemed inaccurate reporting. She also made references to unnamed people who had landed her brother in trouble, labeling them “scum.”

Trailed by reporters as she left, she also declared that she was going to kiss the ground, although she did not say why she wanted to do so.

The minute she walked out of the court building with her brother and his lawyer friend Charles Tan, the feisty woman made good on her promise by lying prostrate on the ground and kissing the floor as passers-by looked on in bemusement.