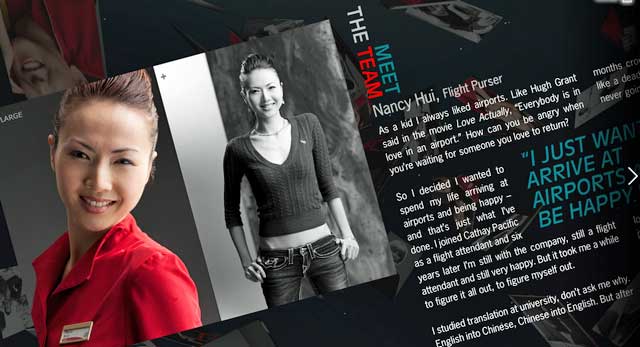 In March Cathay Pacific Airways launched an ad campaign that spurns many of the clichés of the advertising world in general and of airline ads in particular.

Absent are picture-perfect models cavorting in pristine locations and business travelers enjoying the latest reclining seats, or the trumpeting of low fares or convenient flight schedules.

Instead, the campaign uses simple photographs of about 100 of Cathay’s ethnically diverse employees, available on a dedicated web site with short biographies that let people ‘‘meet the team that goes the extra mile.’’ A dozen of the biographies are being used for print, online and outdoor ads running in cities around the world.

‘‘Nowadays talking about seats, or in-flight entertainment, or routes and pricing is really just not enough – it’s just a given,’’ said Vince Viola, managing director of McCann Erickson, Cathay’s ad agency. ‘‘You have to do something else to stand out.’’ The airline realized, with the aid of customer surveys last year, that what made it stand out in the eyes of its passengers was not the ‘‘hardware’’ – the seats or film selections – but the service it provided and its employees.

And so it decided to deploy its staff to star in the campaign – as themselves.

Such a refreshing change indeed!