A Whale of a Feast

And if you’re one of those tree-huggers who oppose foie gras or shark fin, this post is gonna piss you off big time.

Around the world, many coastal communities rely on the cultural, nutritional and economic sustenance whaling provides. In most cases, their whaling traditions and techniques have developed over centuries. To be fair, in all cases, their concern for the health of their communities is vitally linked to their concern for the health of the whale populations.

Whaling communities are widespread, in many regions: the Arctic, the Caribbean, Europe, North America, Southeast Asia, and the South Pacific. In countries such as Canada, the Commonwealth of Dominica, the Faroe Islands, Greenland, Indonesia, Japan, Norway, Russia, St. Lucia, St. Vincent and the Grenadines and the United States, communities and cultures are sustained by the small-scale, sustainable harvest of cetaceans.

Whaling in Norway is a centuries long tradition in Northern Norway. Minke whales were traditionally caught by Norwegian fishermen during the summer months, which is the low season for other types of fishing. Minke whale meat is used for human consumption and Norway has a long tradition of eating whale meat.

Only Minke whaling is permitted, from a population of 107,000 animals in the North East Atlantic and is argued by proponents and government officials to be sustainable. Still, it has been frequently criticized by foreigners and animal rights groups as Norway, among Iceland and Japan, is one of few countries that still allow whaling.

My Norwegian friend Allan returned from Norway recently and gave me two boxes of whale meat: 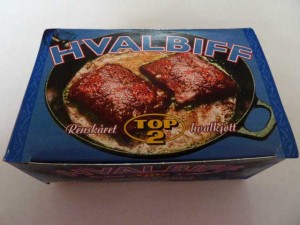 Opened up, here’s how the raw meat looked like: 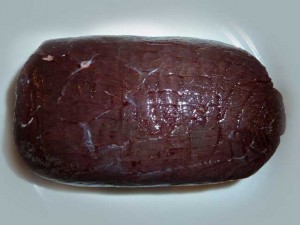 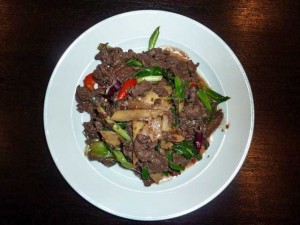 Jone Joachim Abotnes, another Norwegian friend once told me that in Norway, Beef Stroganoff is actually whale meat, so I decided to grill some. When grilled, the meat tasted somewhat fishy and gamey: 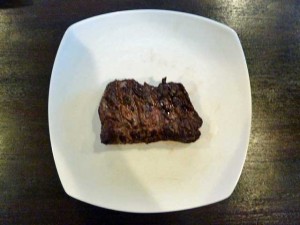