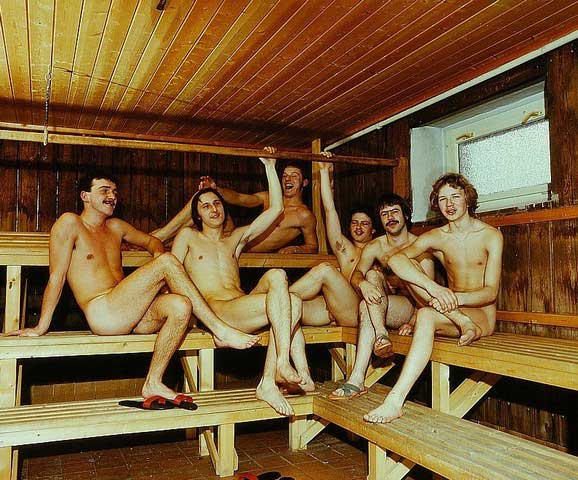 Masochists waiting to be cooked.

Two finalists at the World Sauna Championships on August 7 collapsed and were rushed to the hospital.

One of them died later.

Such “championships” must surely rank with eating contests as the stupidest things any idiot can participate in.

The organizer should be held accountable for the contestant’s death.

I don’t wish to speak ill of the dead but the dumbass who died asked for it, especially when there was no prize other than “some small things” according to the organizer, one super fucktard by the name of Ossi Arvela.

Both of the events finalists – Russia’s Vladimir Ladyzhensky and Finland’s Timo Kaukonen – were rushed to the hospital after collapsing during the competition, in which contestants are made to endure temperatures of 110 degrees Celsius (230 degrees Fahrenheit) for as long as they can. Ladyzhensky later died.

Gruesome pictures online show both men’s skin peeling off from their red, cooked, bodies. Witnesses said both contestants were so badly burnt they were bleeding.

The event, which has been held since 1999, took place in Heinola, Finland. (The event is opposed by the Finnish Sauna Society.)

The tradition of the sauna is central to Finnish culture. In a country of 5 million people, there are believed to be about 1.5 million saunas.

While police have launched an investigation, Arvela said in a statement that “all the rules were followed and there was enough first aid personnel. All the competitors needed to sign in to the competition was a doctor’s certificate.”

Arvela also said “I know this is very hard to understand to people outside Finland who are not familiar with the sauna habit, it is not so unusual to have 110 degrees in a sauna. A lot of competitors before have sat in higher temperatures than that.”

Both dumbasses suffered such severe burns on their body that the competition was cut short after six minutes.

In 2007, ESPN columnist Rick Reilly entered the World Sauna Championships. He lasted just over three minutes in the sauna. This is how he described it:

“The tips of your ears start to ignite. The backs of your arms scream. Your throat burns as if somebody had stuck a tiki torch down it. Your lips feel bitten by large, unseen raccoons. And you haven’t hit 30 seconds.

“Now do it for 10 minutes or more, and that’s what it’s like to compete in quite possibly the world’s dumbest sport: the Sauna World Championships.”

Gives new meaning to the phrase: “going out in a blaze of glory.”

In the meantime someone should grill Arvela in an oven.