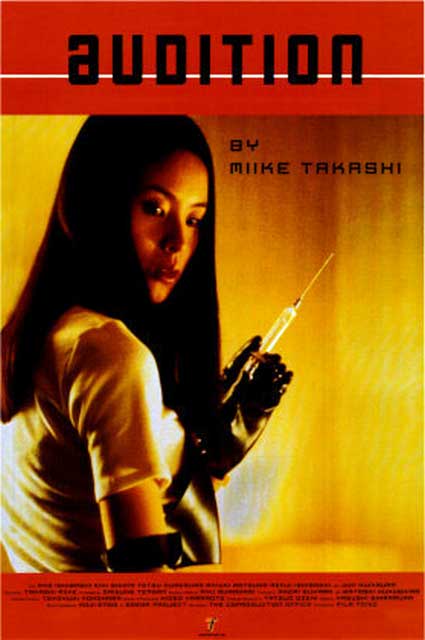 Some film makers love to shock too.

Takashi Miike is one such fellow.

His Audition had its share of audience walk-outs. When shown at the 2000 Rotterdam Film Festival, one enraged female viewer confronted Miike by shouting at him: “You’re evil!” During uncensored members-only shows at the Irish Film Institute in Dublin in 2001, some patrons collapsed in apparent shock. One audience member was rushed to hospital.

For its unflinching graphic content, the film has been likened to the film adaptation of Stephen King’s Misery and Nagisa Oshima’s In the Realm of the Senses. Among film makers featured on Bravo’s 100 Scariest Movie Moments (on which the film appeared at #11), notable horror directors including John Landis and Rob Zombie found the film very difficult to watch, given its grisly content; Landis claiming that its extremities even deterred him from enjoying the film overall.

Bloody Disgusting website ranked the film fourteenth in their list of the “Top 20 Horror Films of the Decade”, with the article saying “Considered by many to be Takashi Miike’s masterpiece, this cringe-inducing, seriously disturbed film boasts one of the most unbearable scenes…in movie history… It’s revolting in the best possible way; the prolific Miike goes for the jugular here, and he cuts deep.”

Miike’s Visitor Q would give a Sigmund Freud a coronary.

If you enjoy being shocked, check out Takashi Miike.