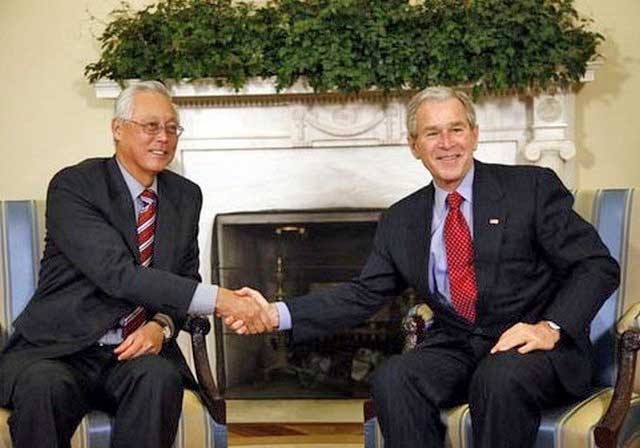 When Goh Chok Tong visited the refurbished Geyland Serai market in May, he said that while he liked the wide range of halal food and other items available at the market, that did not mean the government should designate it a halal market.

As a market built with public funds, it could not be designated thus because other communities would demand similar ones for their own communities, he said.

“A Buddhist market, a Christian market – that’s not possible,” he proclaimed.

The area’s MP, Dr Ong Seh Hong later had to clarify the Government have “no intention of planting a pork stall” there.

Next Goh chided Singaporeans for complaining too much about overcrowded trains and the lack of carpark spaces and public housing.

“I want to put these challenges into perspective with the overall needs of our society,” he declared.

“There are still some poor people. Those who are disabled and those who needed help.”

And just recently, his remarks about permanent residents, made at a dialog at his Marine Parade constituency “ignited a firestorm that has raged over the last few days.”

He added that of the 500,000 PRs in Singapore, “maybe 50,000 can be selected to become Singapore citizens, the rest can be PRs contributing to the economy.”

The blowback was reportedly “swift and furious.” A comment thread on expatriate website ExpatSingapore was started with the header “Singapore to expel 10 per cent of Permanent Residents.”

Sensing the wind, Goh’s press secretary later had to clarify saying his boss’ comment was a “general observation to illustrate the point that the Government would be managing the inflow of PRs and would encourage some of those who are already here to become Singapore citizens.”

Now you understand why Goh was never Lee Kuan Yew’s first choice as his successor.

At a session with students from the National University of Singapore and the Nanyang Technological Institute, Lee caused a stir when he described Goh as “wooden” and said that Goh might have to see a psychiatrist about it.

Well, Lee himself has made some controversial statements lately. Maybe it has to do with age.

Remember his “The Taiwanese are ruthless, Hong Kongers are shameless and Singaporeans are ignorant” quote?

Remember what he said about retiring early? He said, “If you start saying ‘Oh, I’m old’ and you start reading novels or playing golf or playing chess or Scrabble, you’re on your way down.”

(Hmm, I happen to like novels, golf, chess and Scrabble since I was nine. So I’m on my way down huh? Thanks a lot.)

Like Goh, he had later to clarify what he said.

Goh and Lee are not the only ones who had to deal with verbal gaffes.

Mah Bow Tan announcement in 2007 that the government had increased its long-term population estimate caused a furor. He said the Urban Redevelopment Authority would be using a projected population of 6.5 million. Singaporeans, already agitated with the overcrowding became upset.

Sensing the agitation, Mah later had to clarify that 6.5 million is not a target but a “planning parameter” to guide future development blueprints.

The most difficult thing to eat must be your own words. Ask David Adelman.