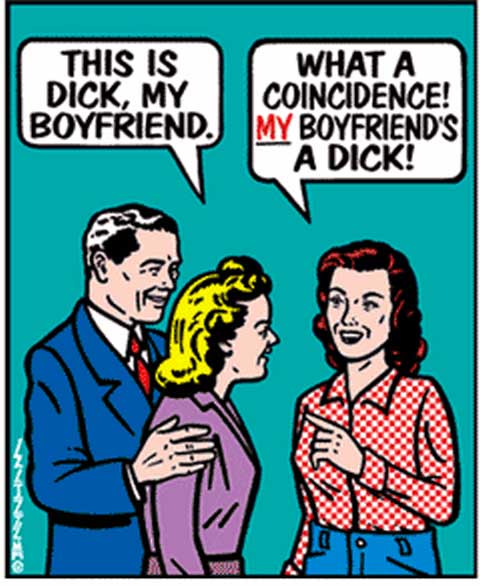 There is a toast, often said in jest – “To wives and lovers, may they never meet.”

I propose another one –  “To spouses and friends, may they never meet.”

Feel free to substitute “spouses” with “boyfriends” or “girlfriends.”

Claire was close to a group of friends, they used to meet for high tea, lunch, etc. Then she got a boyfriend and she stopped seeing her friends. In the end, she lost contact with practically everyone in her circle.

Her boyfriend couldn’t stand any of her friends.

Bronywn, a ballerina,  leads our dance appreciation club. We meet on fifth Sundays to discuss dance and to watch and critique performances. Bronywn’s a great gal but her husband absolutely detests some of us – his body language says it all. Bronywn has a friend of 30 years – Alice – who joins us and whenever Alice starts talking, Bronywn’s hubby would zonk out and stare straight into space and completely ignore Alice. (As a matter of fact, he has very poor social skills and often does that no matter who’s speaking!) Sometimes he would even roll his eyes when some of us speaks. He does this a lot when Alice speaks. He denies it of course but this puts Bronywn in a rather difficult position – in addition to being embarrassed and feeling apologetic towards Alice, Bronywn is under pressure to choose between loyalty to her good friend of 30 years or to un-invite her husband to our gatherings.

A workplace example: Doug was a good boss, very accommodating, very helpful but everyone hated going to see Doug because they would be confronted by his “gatekeeper” – his obnoxious secretary, a “secretary from hell.” Soon, people avoided Doug.

I wonder if we realize that we can make our husbands/wives/boyfriends/girlfriends/bosses look really bad by the way we behave.

I wonder if John’s wife, Claire’s boyfriend, Bronywn’s husband and Doug’s secretary have thought about how others perceive them.