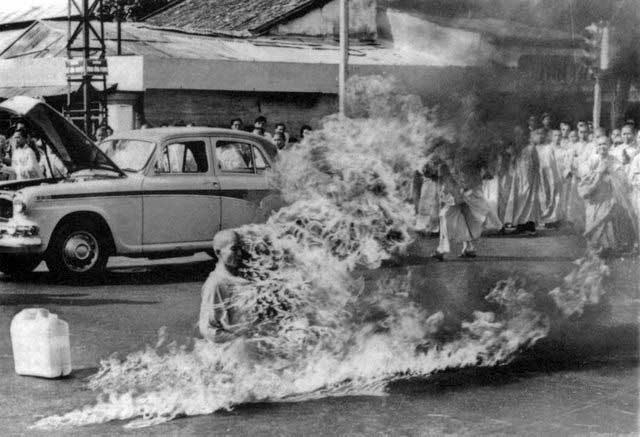 At midday on June 11, 1963, Vietnamese Buddhist monk Thich Quang Duc took a ride in a car to the corner of Phan Dinh Phung and Le Van Duyet streets in central Saigon (now Nguyen Dinh Chieu and Cach Mang Thang Tam streets). He sat in the lotus position in the middle of the junction, instructed two other monks to pour petrol all over him, struck a match and burned himself to death.

The 66-year old monk decided to sacrifice himself in protest after four years of increasing oppression by the US-backed Ngo Dinh Diem administration towards Buddhist priests and the Buddhist community,

Malcolm Browne won a Pulitzer Prize for this iconic photo (above) of the self-immolation, as did David Halberstam for his written account.

“Flames were coming from a human being; his body was slowly withering and shriveling up, his head blackening and charring. In the air was the smell of burning human flesh; human beings burn surprisingly quickly. Behind me I could hear the sobbing of the Vietnamese who were now gathering. I was too shocked to cry, too confused to take notes or ask questions, too bewildered to even think… As he burned he never moved a muscle, never uttered a sound, his outward composure in sharp contrast to the wailing people around him.”

One of the policemen threw himself to the ground and prostrated himself in front of the monk in reverence. That evening, thousands of Saigonese claimed to have seen a vision of the Buddha’s face in the sky as the sun had set. They claimed that in the vision the Buddha was weeping.

The self-immolation was later regarded as a critical point in the collapse of the Diem regime. Diem was assassinated in November that year.

A statue of Thich Quang Duc was inaugurated in Ho Chi Minh City on September 18.