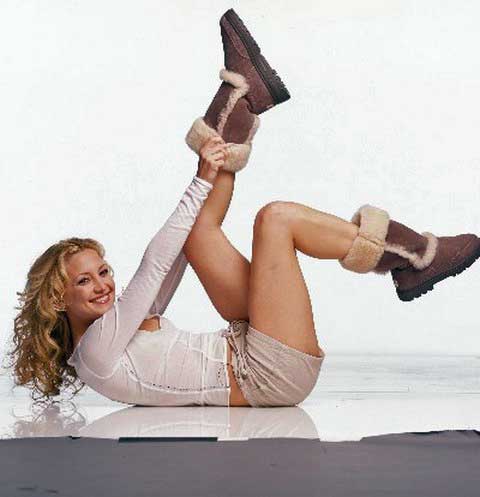 Nearly everyone has an opinion about those god-awful sheepskin boots from Australia but few know about the legal shenanigans behind the scene.

In Australia, they used to be sold at mom and pop stores and at gas stations when I was a kid, now they are made in China under UGG Australia, a company owned by Deckkers Outdoor Corporation, an American conglomerate which also owns Teva.

George Simonton, a professor at New York’s Fashion Institute of Technology and a member of the Council of Fashion Designers of America says “People say they’re ugly, but you’ll see them on a gorgeous model who accessorizes well and it’s very sexy.”

“They” are often referred to as “ugs” or “uggs” or “ughs” – all short for “ugly” and supposedly had their origins way back in World War One when Aussie pilots were told to keep their legs from freezing in unpressurized cockpits with “flying uggs” or “fugs” – sheepskin boots.

It is said that sheep shearers have also tying scraps of sheepskin tied around their feet for warmth since the 19th century.

In 1933, a company called Blue Mountains Ugg Boots began mass producing them. In 1970 an Australian named Shane Stedman was granted trademark for “ugh-boot” and “ugh” in 1982. Years later a Brian Smith acquired that name as well as the name “ugg.” Then in 1995, California- based Deckers acquired UGG for an estimated US$14.6 million. In 2000, Oprah Winfrey showcased a pair on her annual “Favorite Things” show and the rest, they say, is history. Jennifer Lopez, Heidi Klum, Sarah Jessica Parker, Jennifer Aniston, Sienna Miller are some of the celebrities who wear them, just to name a few. The men are also wearing them – Leonardo di Caprio, Justin Timberlake and even Harvey Keitel have been spotted keeping their tootsies warm in a pair of the fluffy footwear.

In the meantime, small time Aussie companies continue to produce them right in Australia but Deckers, now producing their boots in China, went on a war path to put them out of business. By Deckers’ count, last year the company terminated over 20,000 eBay auctions, shut down over 2,500 websites, and accounted for some 60,000 pairs of counterfeits sized by customs.

Deckers’ declaration of war on anyone else producing anything similar is an indication of how much it relies on these boots to survive – UGG now accounts for 87% of Deckers’ revenue, dwarfing sales of other brands in its stable.

Dekkers went so far as to petition an editor at the Oxford English Dictionary to change the definition of “ugg” from “a kind of soft sheepskin boot” to a definition that included UGG’s trademark!

Well, they may be ugly, but they sure are comfortable – I know of entire ballet companies who would trade out their pointe shoes for shearling-lined UGG boots between performances. “They’re so comfy, when you put them on, you honestly don’t care what you look like,” is a common comment by ballerinas.

Kinda reminds me of my Crocs, but I’m sure those guys at Deckers would balk at the comparison. UGG boots can easily cost two hundred bucks US a pair. One Jimmy Choo model, available from October, retails for up to US$795/-.

To underscore a point, Tamara Mellon, president and co-founder of Jimmy Choo says, “Other than Jimmy Choo, UGG Australia is the only other footwear I have in my wardrobe. We are delighted to have created a special capsule that captures the best of both brands – the legendary comfort of UGG with the spirit of Jimmy Choo.”