Happy Coffins? Thanks, but No Thanks! 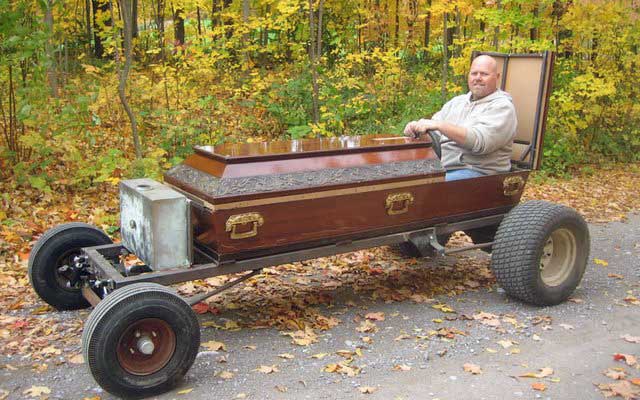 A set of wheels to die for.

If you think Canadian Brian Millett’s conversion of a coffin into a car (see picture above) is morbid, consider Happy Coffins from Singapore.

As part of Lien Foundation’s Life Before Death campaign it has launched The Happy Coffins initiative.

The campaign “seeks to get people thinking and talking about death and dying, and to highlight the urgent need for better care for the dying.”

“The name ‘Happy Coffins’ may be like an oxymoron. But its very antithesis captures what we seek to do,” said Lee Poh Wah, the Foundation’s CEO. “We are turning the coffin from a supreme negative symbol of death into a creative canvas for reflection and inspiration, and the positive celebration of life.” Jesus, do people talk like that in real life? Lee’s spiel sounds like it has been taken off a press release penned by some amateurish PR schmuck.

Last week, The Straits Times (September 29), from which Lee’s quote above is taken,  did a story on the initiative, featuring three old ladies from St Joseph’s Home and Hospice – Elsie Chua, Kitty Fogh and Magdalene Khoo – and their “customized” coffins created by FARM, a Singapore arts creative society. The coffins were decorated according to the “pre-departure wishes” of the three ladies on how their “final resting places” should be. The Straits Times story was accompanied by a picture of the three ladies and their coffins – they looked like proud F1 drivers posing next to their racing cars!

“Instead of gloom and doom,” Sister Geraldine Tan, Administrator, St Joseph’s Home and Hospice said, “This project, though seemingly about death and dying, is really life-giving. It has created a non-threatening platform for our residents to share their lives and talk about their pre-departure wishes and hopes.”

Lee even said, “We have designer clothes and chocolates, so why not designer coffins?”

Sorry but Sister Tan, you lost me when you claimed that the project is “life-giving.” In fact, you sound downright ridiculous if I may say so.

Don’t get me wrong, the campaign is commendable indeed especially the bit about highlighting the urgent need for better care for the dying but would Geraldine Tan and Lee Poh Wah walk the talk?

Would they each have a coffin installed in their living rooms ready for them to hop in when their time is up?

Good sense must prevail. If not, it’s all talk. And talk is cheap. In the end, the whole initiative will sound just like another attention grabbing stunt. Sure the story was picked up by media all over the world but should we be exploiting old, defenseless residents of hospices for publicity and sensationalism?

And puleese, a person’s “final resting place” is definitely NOT a coffin!

Surely people like Lee Poh Wah and Geraldine Tan should know that!