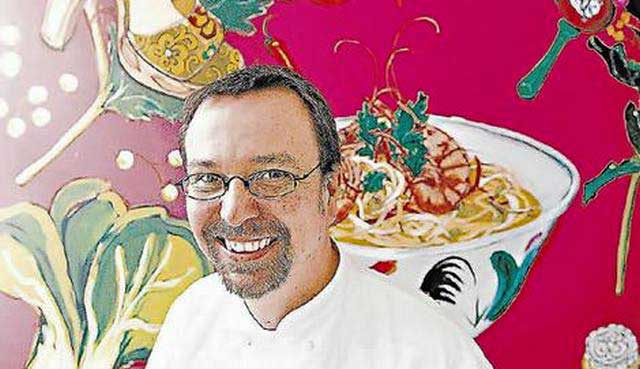 I used to scoff at those two Aussies who operated Darley Street Thai in Sydney.

I read in The New York Times that now one of them – David Thompson – has opened a Thai restaurant right in Thailand!

Not only that, Thomson has the audacity to declare that he is on a mission to revive Thai cuisine.

Thompson, who earned a Michelin star for his cooking at Nahm, a Thai restaurant in London, opened a branch in Bangkok in September. He says he has a mission to return Thai cooking to what it should be.

He says Thai cooking is “decaying” and has less complexity and variation than it once did.

According to The New York Times, Suthon Sukphisit, a food writer for Thai newspapers and an authority on Thai cuisine, reacts to Thompson’s stated mission as if he had just bitten into an exceptionally hot prik kee noo.

“He is slapping the faces of Thai people,” he said. “If you start telling Thais how to cook real Thai food, that’s unacceptable.”

Thompson’s quest for authenticity is perceived by some Thais as a provocation, a pair of blue eyes striding a little too proudly into the temple of Thai cuisine.

Foreigners cannot possibly master the art of cooking Thai food, many Thais say, because they did not grow up wandering through vast, wet markets filled with the cornucopia of Thai produce, or pulling at the apron strings of grandmothers and maids who imparted the complex and subtle balance of ingredients required for the perfect curry or chilli paste. Foreigners, Thais believe, cannot stomach the spices that fire the best Thai dishes.

“When someone comes along and presents himself as the spokesman for Thai cuisine, it’s like Osama bin Laden going to the Vatican and saying he is the high authority on Catholicism,” said Bob Halliday, a Bangkok-based food writer.

It wounds some Thais’ pride that Nahm in London was the first Thai restaurant to win a Michelin star. What is worse, the second Thai restaurant with that honor, Kiin Kiin, is in Copenhagen and was also opening a Bangkok branch last month.

Food enthusiast Nutchanand Osathanond, recently tried a dozen dishes at Nahm in Bangkok. “I can’t tell you why it’s not authentic, but it’s not,” she declared. “Some of the tastes are too pronounced – and it’s drowning in spice.”

The New York Times says that a meal at Nahm is not your generic pad Thai or green curry – those are not on the menu. Thompson’s food is a riot of flavors and obscure ingredients. He has collected 500 books of Thai recipes and pores through these tomes for ideas. He often finds inspiration in what are known as funeral books, published by families at the deaths of their loved ones. They can contain recipes that in life were guarded like state secrets but in death are distributed for all to share.

He said his mission was to “excavate and reveal these wonderful dishes.”

Well, I know many people with huge libraries of cook books – that didn’t make them good cooks anymore than my books on lunar explorations have made me an astronaut.