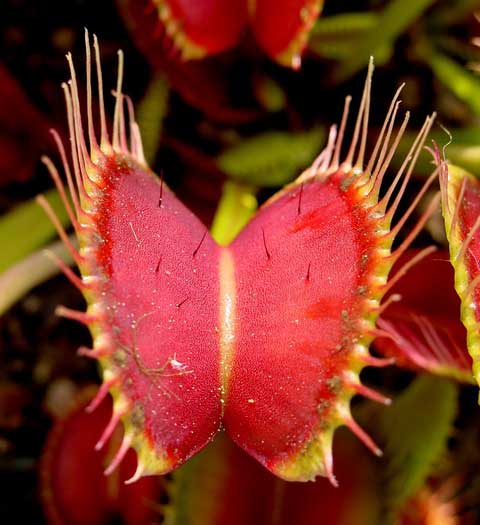 How bout that? A carnivorous plant, oh my.

Retards are everywhere. The latest to show up is one Krista Mahr who wrote in TIME of October 11 that shark fin is eaten “to demonstrate a host’s good fortune.” Mahr – who hails from California – also condemned the dish and of course anyone who consumes it. She also has most of her facts wrong.

Perhaps dumbasses like Mahr who feel it is their business to meddle with the culinary habits of people who are different from themselves should be told to avoid veal and cheese – unless they like killing babies and the feel of smegma in their mouth. (Oh, have I gotten MY facts wrong about veal and cheese, Krista sweetheart?)

I eat shark fin soup not to show off my wealth but because I enjoy the dish, something which jaded and damaged western palates accustomed to eating processed crap masquerading as “food” can never ever come close to appreciating. Put it this way, if Adam and Eve were Chinese, they would probably have eaten the serpent in the Garden of Eden.

With so many morons going around lecturing to people about the evils of eating meat and naming themselves with stupid labels like “lacto-ovo pescatarian” – people will do anything to get attention – I find a recent letter to The Sunday Times most refreshing, level-headed and sensible.

One Paul Chan wrote to The Sunday Times on September 28 to say that twisted ideology on food consumption founded on flawed logic and an unnatural law of living should be curtailed.

“Changing the dietary habits of the human race could cause irreparable environmental damage to our survival,” he wrote.

He also wrote that “society has no quarrel with animal lovers, ‘ethical eaters’ or ‘earth protectors’ over their personal dietary preferences, but their preaching of ‘no meat, no fish’ sermons to convert others is dangerous and unacceptable.”

Allow me to quote the rest of his letter:

“Don’t they know the law of survival of the fittest in the jungles as well as in civilisations? The truth is that if the human race has to eat to live, we have to kill animals from land and sea to survive. We cannot survive on rice and vegetables alone.

“Mother Nature has a way of maintaining balance and regulating excessive growth through natural disasters such as plagues, forest fires, earthquakes and volcanic eruptions.

“When some people opt to follow a vegetarian diet or abstain from eating certain endangered species of animals, it is considered a form of balance.

“But what happens if half the world’s population became vegetarians and abstain from eating shark’s fin, whale meat, blue fin tuna, beef, mutton and pork?

“The sea would be infested with whales, sharks and blue fin tunas, which would prey on all the other marine animals, while cows and lambs would swamp the land to eat up all the grass. We would then compete with other predators for meat and agricultural land to grow rice and vegetables. The hunter would become the hunted.

“We don’t need to disturb the natural cycle of life, and should live peacefully and maintain the eco balance.”

I applaud Mr Chan for his views and for putting those idiotic anti-meat, anti-sharkfin, anti-foie gras fanatics in their place.

Of course in the following edition of The Sunday Times, he was whacked like a rabid dog by ignoramuses who think they’re doing the world a favor by being anti-meat, anti-fish Nazis. If their pathetic lives depend on it, and nothing else is available, let’s see if these retards won’t be the first to stuff their stupid faces with meat and fish.