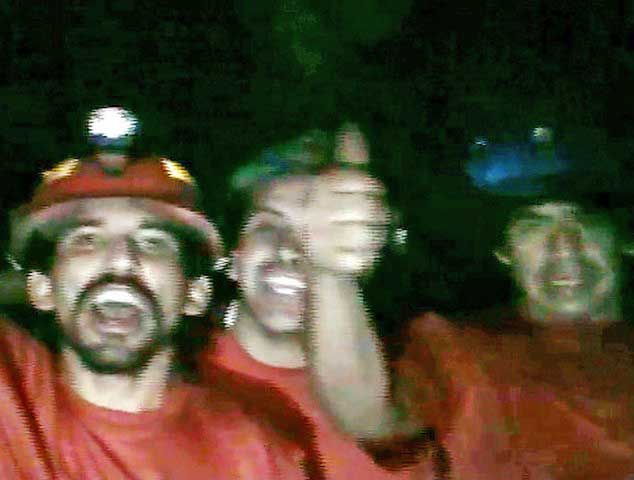 The 33 miners trapped 2,300 feet (700 meters) below Chile’s Atacama Desert since August 5 when their gold and copper mine collapsed above them are finally going to be rescued!

At one time it was estimated that they may have to wait till Christmas before they can be freed.

TIME says psychologists were transfixed by the unfolding drama, watching for what the crisis can reveal about human behavior and the ways human beings react when emergencies obliterate the familiar and temporary societies emerge in their place.

“Every stressor known to man is having an impact on those miners,” says Duke University psychologist John Fairbank, an expert on traumatic stress. “What we’re seeing them do now is trying to normalize their situation, giving it a routine, a structure and a purpose.”

The miners have received clean clothes, reading material, dominoes and letters from loved ones. They’ve been provided music as well as phone contact with family members. The miners’ menu – which at first consisted of nothing but nutrient drinks – now includes yogurt, cereal, tea, sandwiches, kiwis and, recently, hot meals like meatballs with rice. Beans were held back for just the reason you’d think when 33 men are living in a confined space – one more way the decorous rules of the surface were being observed below.

“The key is to create civil order in a circumstance in which there is none,” says Colonel Tom Kolditz, a psychologist and behavioral scientist at West Point and author of the bookIn Extremis Leadership: Leading As If Your Life Depended on It.

The exact way people do that is often a function of age. Shortly after communications were established between the men and the surface, Dennis O’Dell, director of occupational health and safety for the United Mine Workers of America and a veteran of 20 years in the shafts, told TIME, “Leaders will start to emerge, and if they see someone slipping, they’ll try to pick them up. The younger guys will probably defer to the older ones.”

That’s just what happened. The youngest of the miners is only 19. The oldest, Mario Gómez, is 62. He has assumed the role of coordinator, organizing the group into three-man buddy teams so they can all look after one another and serving as liaison to the surface. He has also set up a makeshift chapel to offer spiritual support. Another senior miner, Luis Urzúa, 54, coordinates the work schedules – which will soon included clearing the tons of rubble that will be produced as the rescue shaft is drilled. Urzúa used the hood of a mine vehicle as a desk – an important totem of the workplace. He has also established a rule that no one may eat until all 33 men have received their food.

Sometimes, according to the TIME article, survival strategies are less complex and are merely cosmetic – literally. One of the first things the men requested when a communications link was established was toothbrushes, and they’ve since been sent clean clothes and razors. In the first of the videos they’ve sent to the surface, they were shirtless, dirty and unshaven. Later they looked cleaner, were dressed in matching red shirts, and they’ve shaved. Tidiness translates into discipline, and that can be lifesaving.

“I talked to leaders in Vietnam who would take men into the jungle for 40 days at a time,” says Kolditz. “Every day the men would have to wash off their face paint and shave. That creates civility, and civility prevents conflict and even atrocities.”

The actual extraction will not have been much more fun than the current confinement. The men would have being raised one at a time in a claustrophobia-inducing cage little wider than their bodies. The ride to the surface could take two hours, during which they may be blindfolded or sedated to keep them calm. It will take up to three days for all the men to be rescued, and someone will wind up being the last to go – and alone in the hole.

NASA, which knows a thing or two about keeping people sane during long periods of isolation, has advisers on the scene. The miners have rebelled at these restrictions and recently rejected a delivery of peaches in protest. NASA considers such reactions normal – and even encouraging, since defiant men are not beaten men.

Psychologists and even media trainers were in regular contact with the men, teaching them how to handle the press, how to answer interview questions. Among the books they were reported to be reading was a manual entitled Tactics for Public Speaking.

Victor Frankl was a physician and neurologist until 1942 when he and his wife and parents entered Auschwitz, one of the most notorious death camps of the Nazis. He later referenced Nietzsche – “he who has a why to live for can bear with almost any how” and argued that what made the difference between those who survived and those who did not was not the intensity of their suffering, but whether or not they retained meaning and purpose in their lives. The Chilean miners are testimonies to that. They knew that they will be better times – and perhaps book deals – after the rescue.