Lothario has Left the Mine 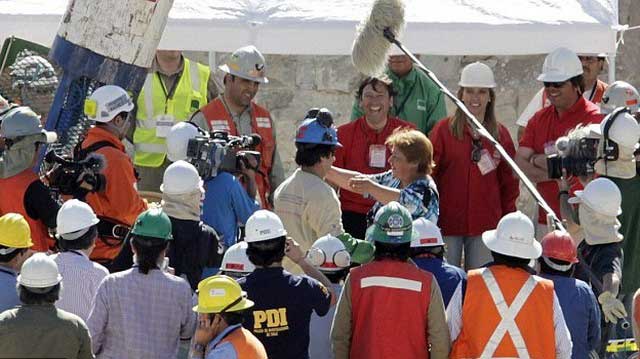 Rojas being greeted by his lover upon his rescue.

In the 1986 New World Hotel collapse in Singapore, a woman discovered that her husband – who survived – has checked into the hotel with his lover and was spending a “dirty weekend” there.

In the recent Chilean mine rescue, miner Yonni Barrios Rojas’ wife discovered that he has kept a lover for the past five years.

The first letter Rojas sent up from the deep was to his lover and his extra-marital affair was exposed as he sat helpless below the surface.

Some argued that Yonni Barrios Rojas had been in the safest place when his wife found out. Others joked that he might not be overjoyed about the prospect of being rescued despite having spent 69 days stuck underground.

It is reported that at least five wives have been forced to come face to face with mistresses whose existence was kept from them by their husbands, who have been trapped underground since August 5.

Wives and lovers, may they never meet!

I bet being far underground is starting to look a little better for poor Rojas right now, now that his secret is out. You know what they say – “Hell hath no fury like a woman scorned” and all the rest of it.