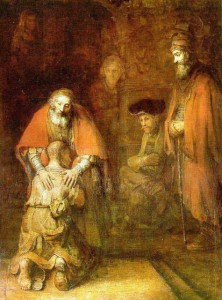 The Prodigal Son by Rembrandt.

Ang Peng Siong’s blunder – he was late – has led to a Singapore swimming relay team being disqualified from a final in the Commonwealth Games on October 6th.

On that day, the 4x200m freestyle team of Teo Zhen Ren, Jeremy Kevin Mathews, Arren Quek and Mattias Ng had qualified seventh fastest in the morning heats for the evening final.

Ang was too late to submit the team for the final.

An appeal was unsuccessful.

The former Olympian blamed the Delhi traffic for making him late.

What’s this they say about many athletes who are all brawn and no brains?

The traffic may be his undoing and beyond Ang’s control, but Ang’s detractors argued that what he could control was his own timing, and he blew it by not heading to the swimming venue earlier. (Ang actually left for the venue 15 minutes before registration closed. How could he? As a presumably well-traveled man, surely he should have the brains to take local traffic conditions into account! )

Apparently the Singapore Swimming Association, which oversees the sport here, has seen fit to forgive Ang. Its president considered Ang’s mistake “trivial.” Jeffrey Leow said “It’s not like we were the USA swim team and there’s a gold medal that we lost out on.” What an idiotic comment! Leow had to eat his words eventually.

In a press release issued after a 45-minute closed-door meeting with the teenage swimmers and their parents on October 13th, Leow said “I regret that my poor choice of words earlier this week has caused offence and compounded our mistake. I am truly sorry.”

To err is human and to forgive may be divine.

But Ang has failed not just himself, but more importantly, the national swimmers entrusted to his care.

Should he be forgiven?

Would the Singapore Swimming Association be so forgiving if it was another person – not a well known, media darling and former Olympian – who screwed up?

Still on the subject of forgiveness, it’s easy to say we forgive but do we forgive more readily when the issue at hand is connected to us only remotely? I’m sure we all forgave Union Carbide for Bhopal and the Ukranians for Chernobyl and Joseph Hazelwood for crashing the Exxon Valdez oil tanker at Prince William Sound’s Bligh Reef and spilled 750,000 barrels of crude oil.

Would the parents of Teo Zhen Ren, Jeremy Kevin Mathews, Arren Quek and Mattias Ng forgive Ang so readily after having invested time, effort and possibly money to ensure that their children make the necessary sacrifices – and perhaps also at the expense of their studies – to a point where they are good enough to represent the country at an international sporting meet? Well maybe they are indeed magnanimous.

Would Leow forgive so readily if one of his own kids was in the team? Well, maybe he would. Who am I to judge him? Those who make idiotic comments can be magnanimous too.

As I write this, I’m in Kuala Lumpur where I’ve just read in the local papers, about a horrific road accident involving six vehicles which took 12 lives. 12 lives! Would the families of the victims be so ready to forgive those responsible?

They say when you forgive, you free yourself from bondage, you live and let live, but I can tell you from personal experience that it is easier said than done.

Personally it has taken me years to forgive certain people for what to others might appear to be minor infractions they have done me.

Often I have taken a long time to forgive not because I couldn’t but because I wanted to continue to abominate and despise that person for a little while longer. That prolonged detestation in my heart gave me immense satisfaction and was cathartic, allowing me to maintain my sanity. But I would eventually forgive, let go and move on. I take care not to be so consumed by my loathing that it toxifies my entire being while the subject of my anger continues to enjoy life as usual, oblivious to my feelings.

I suggest we forgive Ang after we’re done getting pissed off by him, but I hope he doesn’t make any more stupid mistakes.

Because to forgive him a second time for another mistake of a similar nature would be a lot harder.