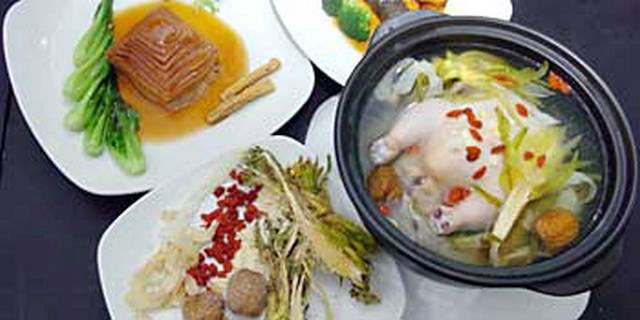 The signature dishes are still there at the Clarke Quay restaurant – two of my favorites are Fluffy Egg White with Dried Scallop served in a potato basket and Cordycep Buddha Jumps over the Wall.

The Metropole Herbal Restaurant is said to be based on the principles of traditional Chinese herbal diets. It is supposed to addresses “real” needs, allowing health conscious diners to balance yin and yang food.

I don’t care for the marketing mumbo jumbo, especially when I know that the Chinese physician’s full head of black hair is a toupée, and nothing to do with his diet. (At Seah Street, he was almost bald.) Physician, heal thyself!

For a rather unusual dessert, check out the candied sweet potato and yam – reminiscent of those old Chinese restaurants. The steamed tubers are coated with thick syrup and dunked into ice water at the table to create a crunchy caramelized crust that breaks upon first bite.