The Vatican of Meat 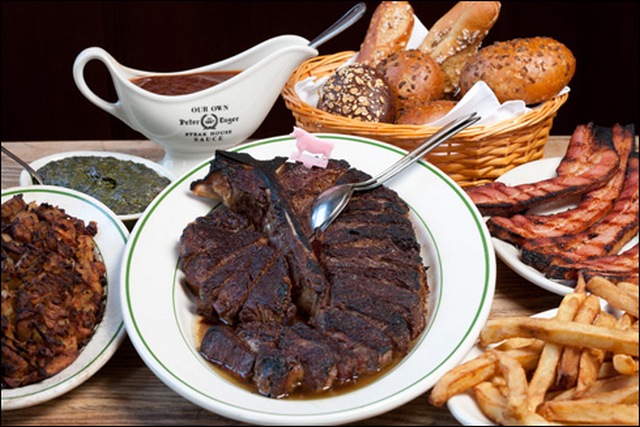 If you go to New York City, make a trip to the Williamsburg section of Brooklyn and eat at Peter Luger Steak House.

Peter Luger has been named the best steakhouse in New York City by Zagat Survey for 26 years in a row. The Brooklyn location now boasts a coveted Michelin star rating as well. In 2002, it was named to the James Beard Foundation’s list of “America’s Classics.”  They have a second location in Great Neck, New York, on Long Island.

Rupert Murdoch, Donald Trump, James Cagney, Alfred Hitchcock, Robert De Niro and Henry Kissinger, and of course yours truly have all eaten there. Peter Luger is a must-go place for me each time I visit New York City.

Peter Luger Steak House has been serving the finest USDA Prime steaks since 1887. The selection process is crucial and therefore is done only by members of the family who visit the wholesale markets on a daily basis. It begins with fresh sides of beef that usually come from the Midwest. The section of beef used is called the short loin. Only those cattle graded PRIME by the United States Agriculture Department are even considered. It is then important to examine the color, fat conformation and bones.

The color must be pink with an even conformation of fat dispersed throughout. This is referred to as marbling. If selected, the loin is brought back to the premises of the restaurant where the dry aging process begins.

The loins of beef sit in a temperature controlled cooler where air circulates around them. After the meat is properly aged, it is butchered and brought up to the kitchen for broiling.

The menu is very sparse – the only entrees being porterhouse steak. Before attacking the steak I always order the jumbo – and I mean jumbo – shrimp (actually giant prawn) cocktail and a few slices of their extra thick – and I mean extra thick – sizzling bacon.

For steaks, the menu I stole home when I last visited the restaurant says only “USDA PRIME BEEF, FAMILY SELECTED, DRY AGED IN OUR OWN AGING BOX followed by STEAK FOR TWO, STEAK FOR THREE, STEAK FOR FOUR, RIB STEAK, SINGLE STEAK and SMALL SINGLE STEAK.”

The steak is brought to your table and cut into more manageable pieces.

Service is brisk, but not impolite. Most of the waiters – mainly oldish men – have a wry sense of humor. Credit cards are not accepted.

For dessert, too bad there isn’t a Ladurée around but you can go to Junior’s for cheesecake.