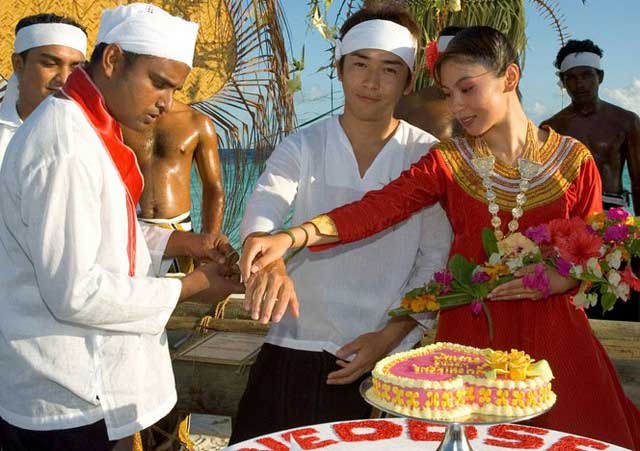 The Maldivian government has apologized to a European couple referred to as “swine” and “infidels” during what was supposed to be a romantic renewal of wedding vows in the Indian Ocean archipelago.

A video of the ceremony said to have taken place on October 11, during which the hapless couple were taunted and subjected to insulting and religious-tinged abuse, was posted on YouTube two weeks later.

The video has sparked fears for the Islamic country’s tourism-dependent economy.

The Vilu Reef Beach & Spa Resort initially identified the victims as Swiss but a senior tourism source in the Maldives told AFP they were French. Maldivian authorities declined to confirm their nationality.

Maldivian police have arrested the hotel employee who conducted the ceremony and used profanities throughout the renewal of wedding vows by the couple, who paid US$1300/- for the event.

The Vilu Reef said it was “unforgivable” that a staff member had read out the sexual and religious slurs in the local Dhivehi language, and apologized for his conduct.

“You are swine,” the couple were told. “The children that you bear from this marriage will all be bastard swine.

“Your marriage is not a valid one. You are not the kind of people who can have a valid marriage. One of you is an infidel. The other, too, is an infidel and, we have reason to believe, an atheist.”

The wife, wearing a white dress and carrying a bouquet, and her husband smile shyly through the ceremony.

In front of a table decorated with incense sticks, the English-speaking couple bow their heads in prayer through the torrent of accusations, curses and swearing.

This reminded me of someone who once ran a store at Centrepoint selling electrical appliances. Whenever a foreign customer walked in, he would insult them by addressing them using profanities, for example, “Hello, chee bye, how can I help you?” or “Hello, lan cheow, what can I do for you?”

Of course those foreigners didn’t know that they were being insulted.

They usually returned his insults with a smile.

They even purchased things from him.