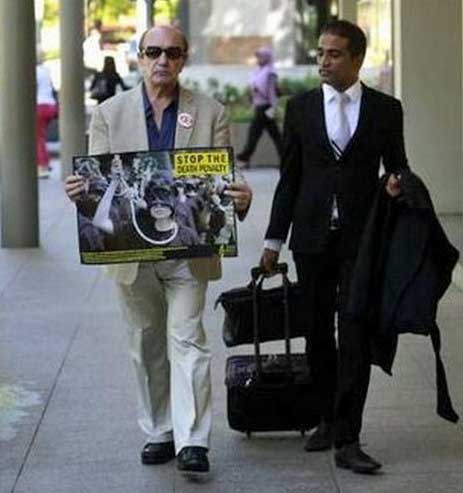 Let the picture speak for itself.

What sort of idiot would go to his sentencing by striding in like a hero and brandishing a political poster?

He might as well wear a T-shirt that says “Hang me!”

The photo shows Alan Shadrake holding a placard against death penalty as he arrived with his lawyer to Singapore’s High Court on November 16.

The 76-year-old British writer was sentenced to six weeks’ jail and fined S$20,000/- for contempt of court in a book questioning the independence of the Singapore judiciary.

In sentencing Shadrake on Tuesday, Justice Quentin Loh said he had given the Briton the chance to apologise sincerely and unequivocally or to withdraw the offending parts of his book.

Instead, Shadrake gave an interview to British newspaper The Guardian, in which he said his book was “devastatingly accurate”; he also disclosed plans for a second edition with extra chapters.