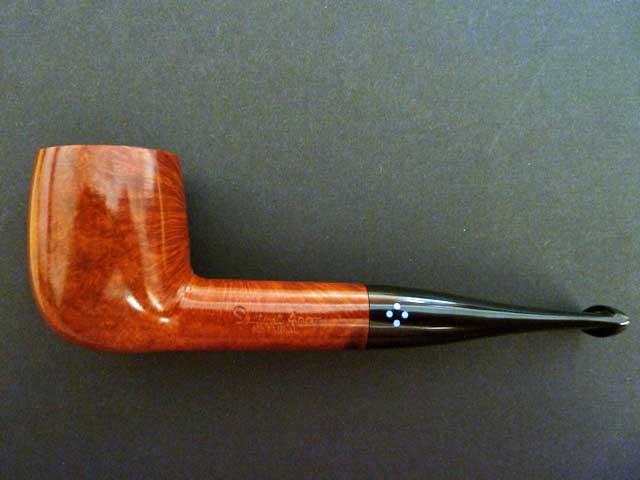 Made in London – aristocratic, proud and pleasurable. Each pipe was cured in an oven over a period of six weeks

Joel Sasieni apprenticed at Charatan, and moved to Dunhill, where he eventually rose to the position of factory manager. He then opened up his own factory in 1919, believing he could improve on some of Dunhill’s methods.

Each Sasieni pipe which came out of the factory had a single blue dot in the stem. Of course Dunhill got upset. Sasieni moved the one blue dot to the side of the pipe. Later he put four blue dots on the stem of his pipes, arranged in the shape of an elongated diamond. Smokers wanted to make sure those dots could be seen by everyone standing on each side of the smoker so Sasieni put four more dots on the right side of the stem. This was later discontinued.

Now the one dot and eight dots are highly priced collectibles.

Whatever it is, each dot is made by individually inserting rods of blue plastic into pre-drilled holes in the stem, similar to the process used by Dunhill for their one white spot.

Joel’s son Alfred Sasieni sold the company in 1979. The new owners re-issued the Eight Dot, and even a Ten Dot. But they too sold the company in 1986. This new firm decided to abandon the high end market, and instead transformed the Sasieni into a mid range product, a metamorphosis from which it has yet to recover. Everything is Four Dots now, lowering the quality of the entire brand – even pipes with putty fills are sold.