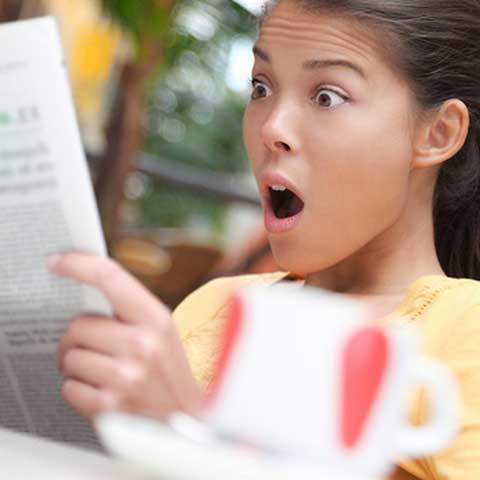 For 90 cents Singapore, it’s quite a lot of pages to read.

But The Sunday Times is spoilt by three things:

One, that stupid mockup of some celebrity’s Facebook page.

Re that Facebook mockup – I can’t really see any point in that campy shit. It takes up a whole page, and it’s not even funny. What a bloody waste of time. The Sunday Times may cost only 90 cents but I sure didn’t pay 90 cents for coprology. If there’s one reason why the papers should come with a barf bag, this would be it.

Re Sumiko Tan – I’m sick of her ramblings. For years we’ve had to endure her bitching and moaning about being single – as well as other issues in her life – and all the rest of it but we put up with that, knowing how frustrated and desperate some old maids can be. (Hey, we didn’t want her to cut her own wrists.) Now that she’s married and presumably getting laid more frequently than before, we thought all those incoherent utterances would finally end, but no way José, her mindless ramblings and senseless drivel continue endlessly. Clearly she’s a very troubled person – issues not mentioned show in her writing! If she’s somebody we might care, but who does she think she is?

Re Lee Wei Ling – Although she makes a lot more sense than Sumiko Tan, I’m beginning to find her grating, even though she is somebody.

Honestly, she should get a blog like everyone else.

Otherwise, she risks being accused of abusing her status as Lee Kuan Yew’s daughter, using The Sunday Times as her personal soapbox.

Anyway, I’m not sure those clowns behind the papers even know what their readers want.

And I don’t think they care at all.