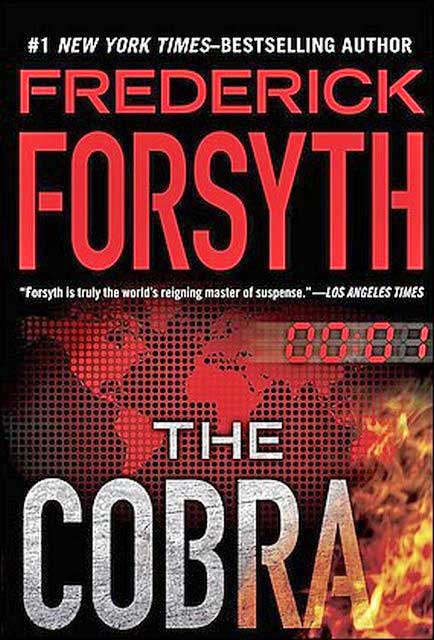 I’ve been a fan of Frederick Forsyth since his first novel, The Day of the Jackal.

A couple of books ago, he announced his retirement.

Imagine my delight when I noticed that he has not kept to his word but has continued writing.

His latest book is The Cobra, given to me by Alan Tang.

The book is entirely fiction but Forsyth who was a journalist prior to becoming an author is known for his meticulous research and his novels read like non-fiction.

In The Cobra, the president of the United States is not named, but he’s skinny and he has a Kenyan father and his wife is named Michelle.

No prize for guessing who this guy is.

The Cobra is a RED – Retired, Extremely Dangerous – guy who was retired by the CIA because of his ruthlessness. Now he is given carte blanche to destroy the cocaine trade.

The law is changed to lump cocaine traders with terrorists, and from then on, it’s “open season.”

Forsyth who’s an old fart now (he’s 72) may be thinking of his own age as he wrote this, his 13th novel. The Cobra is around 70, and Cal Dexter, his right hand man, is about 60. (The latter first appeared in another Forsyth novel – Avenger.)

Forsyth’s age – or perhaps impatience – shows in this, his latest book. In several places in the book he was brisk and way too fast. In the past, he would have furnished more details.

The pace is unusual for Forsyth but the theme of The Cobra mirrors The Devil’s Alternative where the main character is a very small player in a large game.

And as always, there is a twist at the end.

The twist in The Cobra shocked me so much I swear if Forsyth was in the same room as me, I would have punched him!

And maybe his next book will be about me, entitled The Gorilla?