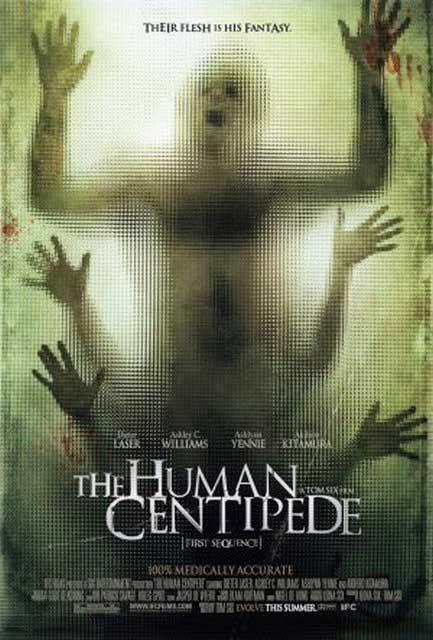 The Dutch movie, The Human Centipede.

It is a movie by Tom Six.

Roth reportedly said of the movie:  “I honestly got sick, and that’s the highest compliments I can give a horror film.”

Tom Six has said in interviews that a surgeon assisted him with the design of the medical procedure and that the film is “100% medically accurate.”

The plot is diabolically simple: two stranded girls from New York on a vacation to Europe walked into the house of a brilliant German doctor who made his name separating Siamese twins.

The problem is that he now wants to do the reverse!

The result is this compelling perverse film.

The two girls plus a Japanese guy were joined surgically, mouth to anus, forming a “human centipede.”

The maniacally intense Dieter Laser is really something to watch! His portrayal of the evil doctor – a hybrid of Klaus Kinski, Lance Henriksen, and Dr Orlof – won him the “Best Actor” award at the Austin Fantastic Fest.

Fans of his can also see him in Lexx.

A sequel is in the works.

Fans would expect no less.