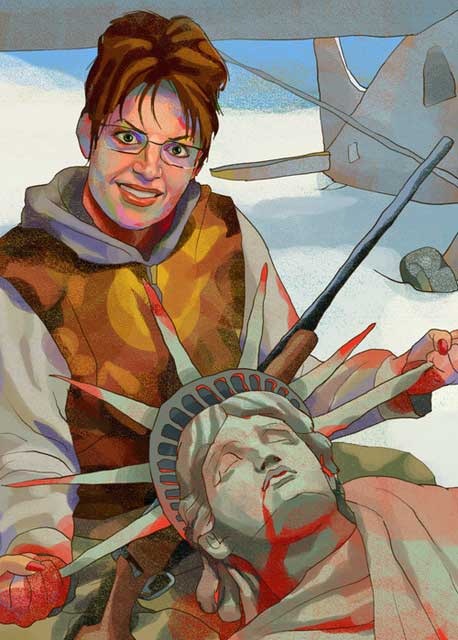 John McCain may be a war hero, but he’ll always be remembered as that idiot who unleashed Sarah Palin upon us.

Palin put crosshairs of a gun on Gabrielle Giffords’ congressional district – among others – and when Giffords was shot Palin said “acts of monstrous criminality stand on their own, they begin and end with the criminals who commit them…”

She defended her use of violent images and other “debate” as a sign of American’s “enduring strength.”

What a frigging douche bag. One that doesn’t seem to go away!

Doesn’t she realize that the “right to bear arms” and the easy availability of guns – there are about 85 guns per 100 people in the United States and every day, about 80 people die from guns – plus all that political rhetoric spewing forth from the mouths of morons and monsters like her are all contributing factors?

It’s time to take that bitch out.

Take Sarah Palin into a room, close the door, test her “enduring strength” and come out of the room, WITHOUT her.

Make sure she doesn’t come out of that room.

If she reemerges, don’t retreat, RELOAD!!!

Thank you, Keith Theodore Olbermann. Didn’t you once threaten to do that to Hillary Clinton? Thank you for inspiring me.

Senator John Sidney McCain III, what were you thinking when you unleashed that crazy woman?

God has mercy on Americans if Sarah Palin gets any further than this.