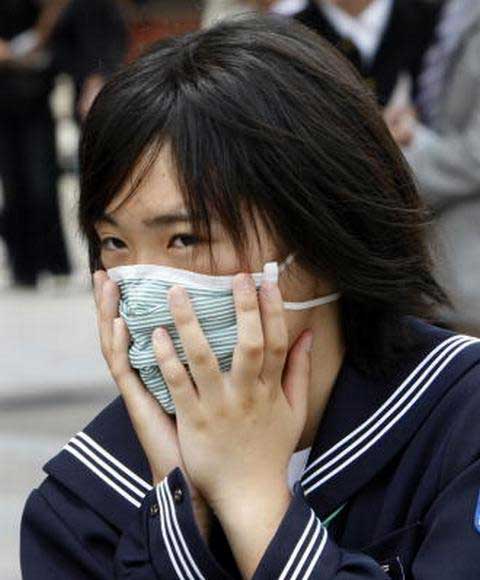 When Junko was a teenager, a man approached her.

Are the Japs weird?

Not long ago, a Japanese high school student walked into a police station carrying a small bag.

“I’ve beheaded my mom and here’s her head,” he told the cops, pointing to the bag.

The Japanese keep up a front – always polite, always courteous; women are even told to speak in a rather fake, high pitch voice, which is supposed to make them sound feminine and subservient.

What do all these suppression and pretense do to the country and its people?

Why do the Japs hide behind masks?

Talking about masks, I was saddened to read about Japanese teenagers actually hiding behind face masks.

These Japanese teenagers may not be battling the flu, but some are donning disposable flu masks wherever they go.

“I remove it only when I eat, take a bath or sleep,” said one 15-year-old. “I take it off when I have to run in my PE class, but put it back on when I catch my breath.”

Speaking to the Asahi Shimbun newspaper in a family restaurant in Takasaki, Gunma prefecture recently, the high school student pulled down his mask only to sip his coffee, setting it back immediately after that.

Throughout the interview, the youth – who was not suffering from a cold or flu – repeatedly touched his mask to make sure it was in place.

His obsession with disposable masks is an example of a phenomenon identified by Yohei Harada, an analyst with ad agency Hakuhodo who researches Japanese youth trends, reported the Asahi.

These masks are widely worn in Japan by people with colds or flu and also to protect from infections or hay fever. But Harada said they are being worn almost all the time by some youngsters for a different reason – to hide their faces.

The youth told the Asahi that he started wearing a mask during the pollen allergy season in his second year of junior high school. Since then, he began wearing it all the time.

“All I can say is it somehow calms me down,” the boy was quoted as saying.

He said three of his friends, who go to different schools, also wear the masks. Although they often meet, the only time they see the faces of one another is when they go singing in a karaoke.

The mask also helps him keep his composure when he is reprimanded. “When I am scolded by a teacher, I can just let it pass or I can be disobedient if I am wearing a mask,” he said. “But, if not, it hurts.”

His mother even helps him take stock of his mask supply, as he uses a new mask every day.

A high school girl who always wears a mask told the Asahi “I can live without it, but it gives me a sense of security because it conceals my face, and I am not exposed to other people’s eyes.”

What will this do to people?

The more people have to suppress their true emotions, the more they have to hide behind façades and put up a front, the weirder they become and the more bizarre their behavior.

Look at Malaysia and the high incidents of incest, a crime so heinous that even Mahathir has raised concerns.

Look at those towelheads in the Middle East – we’ve all heard stories of how they behave like animals and ill treat women.

As for Japan, all those teenagers who can’t function without covering their faces with masks run the risk of one day succumbing to pressure. Their inability to cope with the stress of daily living will only lead to some kind of a breakdown.

The Japs should overcome their insecurity and become more spontaneous and assertive. They must embolden themselves to face the world and stop hiding behind masks while sniffing the panties of teenage girls.

Their entire culture needs a revamp, if you ask me.