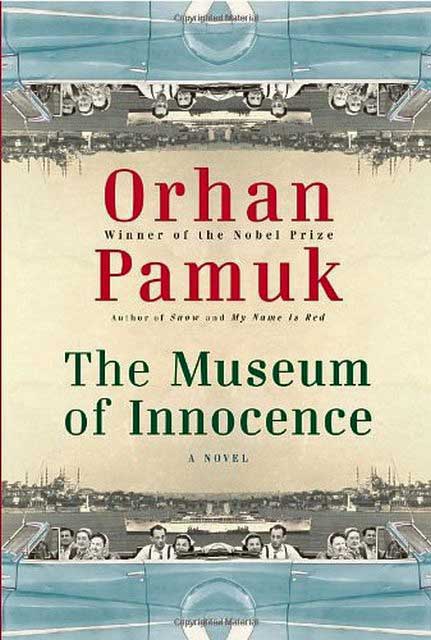 I bought the hard copy but it weighed like a telephone directory –  the book has 83 chapters – so I bought a paperback version. Then I saw another paperback version with larger fonts and I bought that. I started reading but I gave up when it got too personally heart-rending. So I gave it away. Then I felt bad and bought another copy, which I finally forced myself to finish during my recent London and Cuba trip.

I still wonder how Orhan Pamuk could win the Nobel Prize for literature in 2006. It’s not a badly-written book, it’s just such a tedious book to slog and plough through.

Well, at that time he hasn’t written Masumiyet Müzesi. But he has already won the International IMPAC Dublin Literary Award in 2003, for his novel, My Name is Red.

Masumiyet Müzesi, or The Museum of Innocence was first written in 2008, in Turkish. It is Pamuk’s first book after winning the Nobel Prize.

It is the story of Kemal Basmaci, a wealthy Turkish “Ah Sia Kia” and his obsessive love for a cousin, Füsun – an affair spanning 30 years and how he devotes the rest of his life to creating a museum in her memory, stocking it with panties, nutcrackers, china dogs, 4,213 cigarette stubs from cigarettes smoked by Füsun, (yes, gross indeed!), and all kinds of shit – not literally, thank God – recovered from their moments together. Yeah, it’s a bit like us guys collecting some of our girlfriends’ “artifacts” – ranging from their G-strings (preferably worn and freshly peeled off) to their ballet slippers – as mementos.

Both his collecting and The Museum of Innocence itself are best understood as examples of what Pamuk elsewhere calls “hüzün.” It is the Turkish word for melancholy, but “hüzün” is more complex than the English term. It carries a theological understanding of the “place of loss and grief”, it sustains notes of elegy and nostalgia, it conveys a sense of “worldly failure and listlessness”, and it stands above all as the defining emotion of this romantic, post-imperial capital called Istanbul. At the same time, it is also the story of Kemal and all his other “Ah Sia” friends in Istanbul’s moneyed bourgeoisie.

When he met Füsun, Kemal was already engaged to Sibel, who has “given me her virginity.” (Nowhere is virginity so heavily emphasized since Richardson’s Clarissa.) Yup, all kinda boring so far, but Kemal emerges from this book as a worthy descendant of the colossi of blighted love, with elements of Bluebeard, Miss Havisham, Humbert Humbert, even Citizen Kane in his make-up.

The long-suffering Sibel eventually gave up and walked out, but Füsun got married to someone else and disappeared from Kemal’s life. His search for Füsun is very painful to read and reminds me of many personal moments when I longed for someone I once loved but who have passed away. This is the part of the book that made me stop reading.

When they met again, and with Füsun now married, did Kemal give up? No – over the next eight years Kemal invited himself for dinner at Füsun’s house some 1,593 times. He ate her mother’s cooking and drink endless glasses of rakí with her father as they watch Turkey’s single television channel. His longing for her made him abandon the table of his own widowed mother. Füsun is always pleased to see him, but she now treats him as a respected older relative and in the tragic end, just as Hardy’s Tess of the d’Urbervilles or Flaubert’s Madame Bovary, Füsun becomes the victim of the constraints of the society in which she lives and the desires of the men around her just as I have become the victim of Kinokuniya – I still can’t believe I purchased three different versions of the darn book!

The book’s saving grace is the background – we see the fascinating upheavals in Turkish society as the story unfolds. Turkey’s struggle with modernity is brilliantly evoked in this book.