Past his Sell-by Date – A Known Known 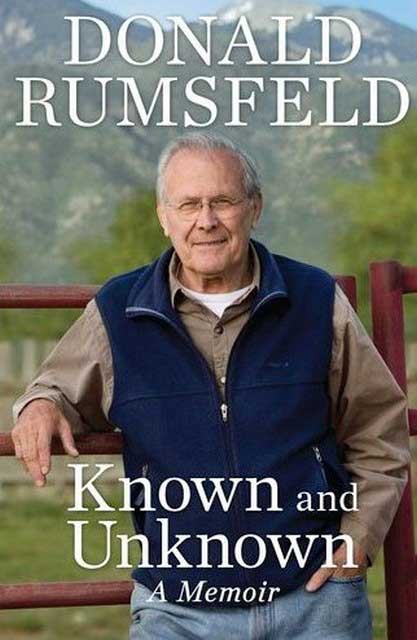 Why do people write memoirs?

Very often it is to set the record straight, to say their piece, to share their perspectives of events, to convince others they are right,  and very often to rewrite history the way they think history should see them. (Of course – if you’re somebody – there’s always a hefty advance from publishers too.)

Not only do senile dictators – think Mahathir, among others, ahem – write memoirs, even politicians in their 70’s write them.

Actors write them too. Michael Caine has written two. Willam Shatner has written a couple as well, and if my instincts are correct, we can expect a third volume from him any time now.

Donald Rumsfeld’s memoir, Known and Unknown, sets out to achieve all these objectives: to set the record straight, to say his piece, to share his perspectives of events, to convince others he was and is still right, and to rewrite history the way he thinks and wants history to see him. What’s more, his book is a defence of his record on Iraq – he devotes most of the book on the subject.

Rumsfeld held a succession of senior jobs in Washington: Republican congressman in the Johnson era, a series of White House jobs under Richard Nixon, followed by ambassador to Nato, chief of staff to Gerald Ford, the youngest ever secretary of defence, Middle East envoy for Ronald Reagan and, finally, the oldest secretary of defence, (or should I say “secretary of self defence”?) under George W Bush. Unlike that buffoon Mahathir (“People do forget things, you know”) Rumsfeld possesses a huge depth of first-hand historical experience and a good memory for detail.

Rumsfeld has always had a colorful turn of phrase and is proud of being a plain-speaking son of Illinois. Ridicule was heaped on him for his rambling thoughts about “knowns”, “known unknowns” and “unknown unknowns” but he seemed to relish that, hence the title of his memoir.

He recruited the cold-blooded Dick Cheney to work for him, first in Nixon’s Office of Economic Opportunity in 1969 and then again, in 1974, as his own sidekick when he worked for Ford. The relationship endured, and Cheney helped secure the defence job for Rumsfeld in 2001. The caricature has it that the pair worked together to impose a neocon agenda on Bush, pulling the strings behind the scenes to control the president. Rumsfeld denies that this was the case. He says that Cheney was “uniquely influential as vice-president” but claims he had very little to do with Cheney in government and that it was Bush who took the decisions. The denial is not wholly convincing, however.

According to Jonathan Powell, chief of staff to Tony Blair between 1995 and 2007, this is a mean-spirited book. Rumsfeld is unfairly tough on Colin Powell. He blames him for the decision not to remove Saddam Hussein during the first Gulf war in 1991 and accuses him of becoming the representative of the US state department to Bush, rather than the president’s representative to the state department.

Powell is by no means his his only target. Condoleezza Rice is criticized as too academic and too inexperienced, and more committed to reaching compromises than to making hard decisions.

According to Rumsfeld, everyone else was to blame for what went wrong. Generals Richard Myers and Tommy Franks were responsible for the insufficient troops in Iraq at the beginning. George Tenet, the CIA director, was to blame for not asking for more troops to attack Tora Bora as Osama Bin Laden fled Afghanistan. And Rumsfeld was always the one person to propose good ideas, such as the “surge” in Iraq, even though it happened after he had left the Pentagon. Those who opposed him, such as Generals Eric Shinseki, the army chief of staff, and Jim Jones of the marine corps, were guilty of insubordination.

If you haven’t already concluded that Rumsfeld is an asshole this book will certainly convince you.

Remember his “stuff happens” remark about the outbreak of looting in Baghdad in April 2003 and the internal memo on interrogation techniques in which he said he didn’t understand why there was so much fuss about requiring Guantanamo detainees to stand for four hours, because he stood for eight to ten hours a day? (He used an upright desk in his office at the Pentagon.)

The photo Rumsfeld chose to adorn the cover of his memoir shows him relaxing, in jeans, standing at his farm probably. Very kind and grandfatherly. Be not deceived. He is anything but.

Like many old hard-hearted has-beens who spend their twilight years penning useless books, he is a sad man who doesn’t realized that he is past his sell-by date. Rumsfeld and Cheney are “old birds” who had learned how to drive the inter-agency process in Washington and could run rings round everyone else in doing so. Yet, to what end? They were far better at process than they were at substance. Rumsfeld likes to suggest he is a strategist, but he is not.

There are no revelations of importance here, and certainly no admission of any wrong-doing. Instead, the relentless desire always to be right is extremely obnoxious. He sounds like a broken record. Even now, Rumsfeld insists that there were links between Saddam and al-Qaeda, that there was an active WMD factory near Khurmal in northern Iraq, and that it was a mistake to have stopped the first assault on Fallujah.

In the end, truth will prevail, no matter what senile assholes insist in their heavily ghost-written books.