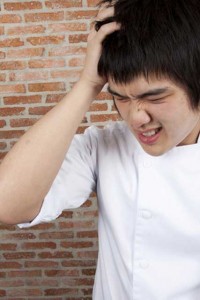 It happened in March 2009 but it was in the news yesterday.

They were at a hawker center; she ordered a bowl of fishball noodles.

She asked him to get her another pair of chopsticks.

He fed her a fishball; she accepted and he thought things were back to normal.

Throughout the meal she spoke on her cell phone, sent text messages, even left the table to sit at a nearby bench.

When he approached her, she walked away.

But she accepted a ride on his motorbike later. He took her back to her place at Ang Mo Kio. However, as soon as they arrived at the carpark, she took off her helmet and threw it on the ground and suggested going to a nearby block to talk things over.

They ended up on the 12th floor where they continued to bicker.

She was leaning against the parapet; in the middle of the quarrel, he placed both hands on her and pushed.

He then climbed over the parapet before jumping.

I don’t wish to speak ill of the dead but honestly, I think the bitch asked for it.

There’s only so much crap a man can take from a woman, really. And at 19, he was at his wit’s end. He was no match for the wiles of the tantrum-throwing older woman. Women are more mature than guys their age, so at 20, her insidiousness would have been his undoing anyway.

The poor bastard will be sentenced this Friday.

NOTE: Photo above is strictly for illustrative purposes only; it does not depict the actual person.