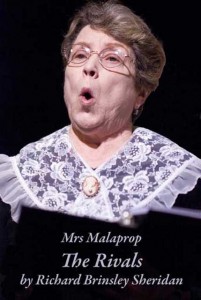 In his book What’s It About? Michael Caine wrote that his mum was a “Mrs Malaprop” – she would say things like “Dubonnet plague” when she meant bubonic plague; she called her favorite singer “Mick Jaguar” and said that the happiest day of her life had been “VD Day.”

My wife Yin is no Mrs Malaprop. Instead, I think of her as Mrs Spooner – after Rev William Archibald Spooner (1844–1930), Warden of New College, Oxford, who was notoriously prone to the tendency of switching consonants, vowels, or morphemes in words, for example saying “You have hissed all my mystery lectures” when he actually intended to say “You have missed all my history lectures.”

This condition is sometimes also known as a “marrowsky” after a Polish count who suffered from the same impediment.

Yin never fails to get all of us at home rolling on the floor laughing when she mixes up actors’ names – she likes Jack Hughman in the X-Men series, and thinks that Gib Melson did a pretty good job directing The Passion of the Christ, and that the best James Bond so far is Con Seannery. She says “wavesair” when she means “airwaves” etc.