This greatly misunderstood book is not an indictment of American parenting techniques.

When my daughter was a little girl there was a period when she was glued to the TV and refused to look at her books. I lifted the TV set off its stand and with the glass side faced down, dropped it onto the floor with a loud explosion, smashing it to smithereens.

Edna, our domestic help at that time, almost had a cardiac arrest.

Some years back when my youngest son threw a tantrum I threatened to hurl him off our 10th floor apartment. I actually dragged him out of the door amidst my wife’s screams. In the meantime my other son was taking it all in and freaking out big time.

Did my daughter turn out to be a basket case? Nope, she has lost interest in TV since, but she designed her first web site when she was only nine.

Are my sons serial killers or PAP candidates? Nope, the one who almost got thrown out of our apartment is in ACS and his brother has just entered Poly.

And if all the kids in the world are to stand in line for me to pick, I’ll still choose the same three great kids to be my children.

By now, 48-year old Yale law professor Amy Chua’s Battle Hymn of the Tiger Mother has been critiqued to death but here’s my two cents’ worth.

Chua’s parents left the Philippines for the States two years before she was born; her parents were strict, they would punish their kids by whacking them with chopsticks and when little Amy took her dad to an awards ceremony at which she received second prize, he was furious. “Never, ever disgrace me like that again,” he scolded her.

So Chua meted out the same kind of parenting onto her two daughters. She forced then 7-year-old Lulu to practice a piano tune for hours “right through dinner into the night” with no breaks for water or even the bathroom, until at last Lulu could finally play.

When Lulu made her a birthday card, Chua threw her less-than-perfect creation in her face, telling her “I deserve better than this. So I reject this.”

When Sopia was disrespectful, Chua called her “garbage.”

Sophia is now 18, and Lulu 15. Sheryl Sandberg, COO of Facebook has met them both and says “they are both phenomenal.”

Yup they did not become neurotic, traumatized, psychologically-damaged teenagers.

Don’t know about their dad though. Chua’s husband is Jed Rubenfeld, also a Yale professor – I wonder if I should call him “Mouse Husband” knowing how Asian wives are.

But seriously Chua’s methods may shock Americans – who believe in mollycoddling their kids until they turn into Michael Fays – they don’t shock me or others like me. Chua’s methods, and mine as well as that of her parents would have landed all of us behind bars in America.

If Chua is a Tiger Mother, then my dad should be referred to as a “Dragon Father”!

When I was in primary school, my dad would use the belt on me whenever I failed math. That was when I was in primary school. Later, when I came home with poor results, he would just ignore me and seethe inside. To be honest, that hurt more than the belt. Seeing how I have disappointed him so much caused me tremendous shame and guilt – that in and of itself was sheer punishment and torture. I still failed my math and had never passed the subject since primary four but I had since vowed to make him proud. I like to believe he has no reason not to be proud of me now.

With the way Americans treat their kids, it’s understandable why Chua’ book was misread and misunderstood by the majority of Americans; when an excerpt of her book made it to the Wall Street Journal some time back, the piece was entitled “Why Chinese Mothers Are Superior” – not the correct title of her book. Please note that the book is far from being a condemnation of American parenting techniques.

But since I’m at it, let me ask a pertinent question: is parenting, American style, effective?

2010’s Program for International Student Assessment revealed that American students were mired in the middle: 17th in reading, 23rd in science and 31st in math – 17th overall. Students in Shanghai blew everyone else away. When asked to account for the results, education experts produced a starkly simple explanation: Chinese students work harder, with more focus, for longer hours than American students do. On campuses around the world where there are Chinese students, in most cases, Chinese students top every subject. These include ethnic Chinese from places like Singapore, Malaysia, Indonesia, Thailand and the Philippines.

When the National Football League postponed a Philadelphia Eagles game in advance of the late-December blizzard on the East Coast, then Pennsylvania governor Ed Rendell was left fuming: “We’ve become a nation of wusses,” he declared. “The Chinese are kicking our butt in everything. If this was in China, do you think the Chinese would have called off the game? People would have been marching down to the stadium. They would have walked, and they would have been doing calculus on the way down.”

The truth is, many of the elements of Prof Chua’s approach are supported by research in psychology and cognitive science. If you don’t believe me check out books by Hara Estroff Marano and take a look at research conducted by people like Carol Dweck of Stanford and Daniel Willingham of the University of Virginia.

American parents’ indiscriminate slathering of praise on their kids for the lowest of tasks – all part of the “I-am-positive-because-I-am-Amer-I-CAN” movement – only results in under-performing, emotionally brittle human beings vulnerable to anxiety and depression, full of sound and fury with precious little to deliver.

If you work and interact with Americans, you’ll know exactly what I mean. 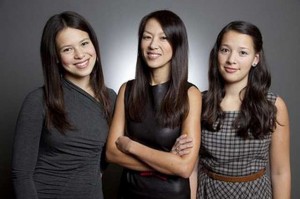 Prof Amy Chua with her daughters.