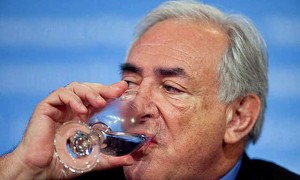 IMF chief 62-year-old Dominique Strauss-Kahn was charged on Sunday in the US with attempting to rape a New York chambermaid in his US$3,000/- a night hotel suite.

In the meantime, allegations that Strauss-Kahn has engaged in a pattern of sexual assaults dating to at least 2002 have emerged. In fact, his philandering has earned him the nickname “The Great Seducer.”

Pundits are wondering if the long-standing French tolerance for private sexual misadventures has allowed criminality by one of France’s best-known public figures to go unpunished. (Strauss-Kahn was once French finance minister.) Questions are being raised about what some call an “omerta” – or unofficial law of silence – in France about sexual misconduct.

In the meantime a French writer Tristane Banon, said on Monday that she was likely to file a criminal complaint in coming days accusing Strauss-Kahn of sexually assaulting her nine years ago. Banon first made a public accusation against Strauss-Kahn in a 2007 French television interview, saying he wrenched open her bra and tried to unbutton her jeans during an attempt to rape her.

Strauss-Kahn is a self-confessed womanizer, and that doesn’t help his case; however, like everyone else he must be considered innocent until proven guilty. Presumption of innocence until proven guilty is the bedrock of law in free societies and Strauss-Kahn, like any other person, has the right to a fair procedure.

But unlike everyone else, he should have been more circumspect in the things he says and in his behavior. Going around bragging that he is a womanizer is a definite no-no and just because you are a powerful man doesn’t mean every woman is fair game. (I’ve long argued that successful people have high sex drives, but that’s not a license for criminal sexual assault.)

Of course, conspiracy theorists are quick to react – witnesses can be bought, evidence can be planted, they say.

Regardless, it behooves those of us in positions of strength to watch our behavior lest we be wrongly accused or lest we lose our head and stray into the dark side.