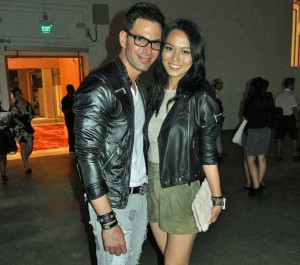 A local TV actress and her boyfriend stormed out of Nando Tanglin Mall on Monday when they found that they would be charged S$3.90/- for a cup of warm water.

“Somebody please save this restaurant. They have no idea what service and initiative means,” she tweeted via @JoannePeh, triggering a flurry of comments from her 20,000 followers, many of whom supported her.

Well I wasn’t there but I’ve eaten at Nando a couple of times and I think it must be pretty bad if people applaud when you leave.

Two letters in The Straits Times are worth repeating:

Those in positions of power, in the media or who are famous have a higher responsibility to young waiters and waitresses who try as hard as they can.

If the restaurant’s boss and policy did not permit them to serve hot water, that was not their issue.

A more gentle and respectful approach by the actress would have likely solved the problem – with the actress looking big-hearted to boot. Not so now: 200,000 people should dump her from Twitter and make her play an abused waitress on a TV show.

The practice of not serving water for free in some restaurants, whether hot or cold, has been around for quite some time. Ms Joanne Peh should know that and stop trying to be a diva.

Poor service? Perhaps, but there is no need to tweet about it. Better to offer constructive feedback. – Christina Ong

I live very near Tanglin Mall. As such, I frequent the place often. I have known the staff at Nando’s to be friendly and polite – and never anything but. Reading the article, all I can think of Joanne Peh is her stern obstinacy and profound ignorance. As pointed out in the article itself, many other restaurants charge their patrons for water. When in Rome, do as the Romans do. Ms Peh obviously does not know that. – Diana Tyebally