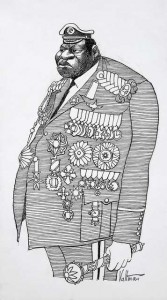 He probably awarded himself all those medals.

It’s usually the A-listers who are nice.

The small fries are the ones who act like divas.

It’s the same when I was doing my National Service.

The senior NCOs, the junior officers – the nobodies were the nastiest and meanest.

When we interacted with the colonels and the lieutenant-colonels they were all so urbane and pleasant.

We National Servicemen were surprised.

Because the lower-ranking retards were so obnoxious, we had expected the senior officers to be monsters.

But we were proven wrong.

Some of the highest-ranking officers were the nicest, most humane people we’ve ever met.

I see the same thing today in the world we live in – those who are really somebody are usually rather low-profile, they’ve made their money a long time ago, there is no need to prove anything to anyone anymore, they are comfortable with themselves and their egos do not need to be stroked by joining fancy organizations, or donning swanky clothes, or wearing watches that blink like torch lights, or driving cars modified to sound like motorboats.

As a matter of fact, every time someone speeds by in a car that has been modified to emit a very loud noise, I immediately think that he must have a very short dick.

It’s all about compensation.

The guy with the smallest dick has the loudest car.

The parvenus and the arrivistes have to find a way of being accepted hence the prima donna behavior, the gaudily-decorated condo, the strut, the swagger, the fuck face, the Beng car.

You get the idea.

The old saw that empty vessels make the most noise still holds true.