Nightingale Nursing Home – Shut it Down, Prosecute the Management, Lock them Up, Throw away the Key! 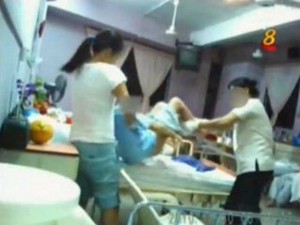 When I saw the video on Thursday night, I almost lost my dinner.

I certainly lost my composure.

A naked 75-year-old woman was shown sitting under a ceiling fan.

Next scene, no longer undressed, she was hurled into another bed and when she groaned she was slapped.

This is the work of the spawn of Lucifer!

The authorities called it a lapse of service.

The Health Minister apologized to the family of the poor old lady.

But unless I’m blind or deaf or illerate I have not read or heard of any attempt to prosecute those behind the nursing home.

Actually, there seems to be a conspiracy by the authorities and the “lamestream” media to hide the identity of the Nazis behind the nursing home.

Come on, it’s time to name them and shame them!

The retards behind Nightingale Nursing Home should be identified, thrown into jail the same way that poor old lady was dumped into that bed, and the key disposed of permanently.

How many more cases of abuses must come to light before something really serious is being done?

In nursing homes such as these, with mainly un-educated inmates with dementia, I can only imagine the horrors within.

I am sure there are other cases of abuse the public knows nothing about.

Come on, health minister Gan Kim Yong, unless you want your own mum to be hurled about like a burlap sack of garbage, show us that you are really serious about your job.

Your apology rings hollow if the real culprits go un-punished!

And fashionable as it may be for PAP ministers to be apologizing for all kinds of shit nowadays,  I’m not even sure you should be the one apologizing; last time I checked you are a mere mortal, not Jesus Christ, you don’t need to bear the sins of the world on your sissy shoulders.

Let the Judases behind Nightingale do that and make them mean it.

Yes I say, shut down Nightingale Nursing Home, show the public who these puss bags are, prosecute them to the fullest extent of the law, lock them up, and throw away the goddamn key!

Am I trying to stoke public anger?

Because righteous indignation has its place!