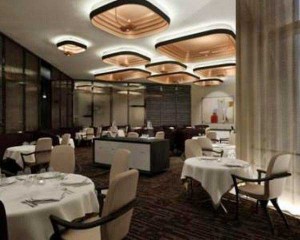 I’m now wary of celebrity chefs opening up in Asia.

I ate at Joël Robuchon‘s Hong Kong restaurant last December; it was a bit of a letdown.

Charles and I had lunch at Daniel Boulud’s db Bistro Moderne on May 31. We were totally not impressed.

As for Guy Savoy, he is one of France’s most celebrated chefs and has been awarded the Legion d’Honneur from the French Minister of Agriculture and was once even voted France’s Chef of the Year by his peers, among his numerous honors.

Last Tuesday evening I ate at his restaurant at Marina Bay Sands with another friend. 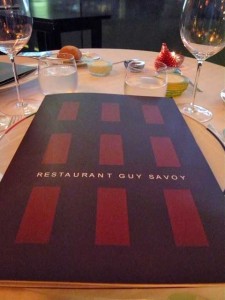 We had the Menu Prestige which we were told, highlights the chef’s best creations. Priced at S$408/- per person (price not inclusive of service and prevailing government taxes) it consists of the following dishes:

The ambiance was so so and the staff not snooty (unlike those at pretentious tai tai places like Jones the Grocer) but the perfume of the lovely Filipina waitress assigned to our table overwhelmed everything and reminded me of the cheap perfumes worn by Arabic women.

It was annoying having to cringe every time she came to our table. I wished it was the food that I was smelling. Instead I had to deal with the olfactory assault from her fragrance as each course was served.

While the ambiance was so so, we couldn’t eat the ambiance so the focus had to be on the food and in that aspect it was rather disappointing.

The entire menu lacked color – almost every dish was in brown, gray or black – was lackluster in presentation and failed to please or surprise. 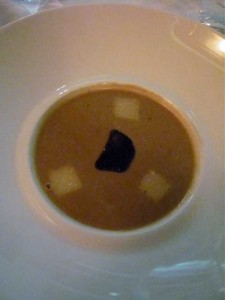 I had thought that the visual element is a vital ingredient in French cuisine.

Don’t get me wrong; the food was tasty and the service friendly and I would certainly return again if I need to entertain some VIPs without having to fly overseas to do it – it’s just that I felt the entire meal lacked a wow factor. Something was missing!

I know I have a jaded palate but it says a lot when after paying the thousand-over dollar bill I was left feeling rather hoodwinked and ended up craving for a metal cup of Indian rasam.

The only dish I enjoyed was the Pigeon “Poché-Rôti” and the only visually appealing dish was the rather mediocre Strawberry Textures dessert. 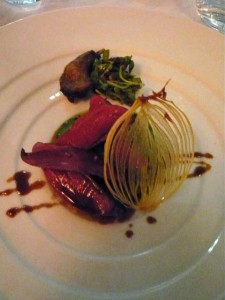 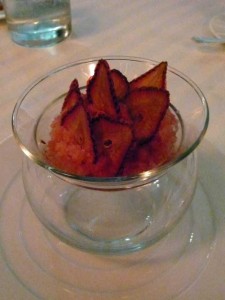 The only visually-appealing dish.

As for “Colors of Caviar” it was obviously a misnomer. The dish was four layers of dull-colored crèmes and foams – truffle sabayon, green bean gelée, fromage blanc custard, chestnut mousse – stacked inside a transparent glass cup, served with a mother-of-pearl spoon (as caviar should be.) The caviar was supposedly Ossetra, but, honestly, I can get better grade of caviar from my neighborhood supermarkets. My dining companion remarked, “Even I can tell that this is not good caviar.” This was the only dish that I wished better grade ingredients were used. 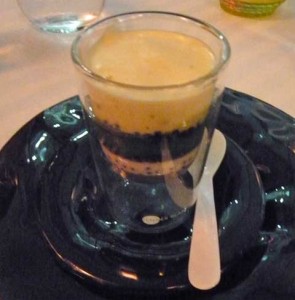 One has to be a very inexperienced diner or possess a very unsophisticated palate to say that the food at Guy Savoy Singapore is anywhere near good.

“As far as I am concerned, the free parking provided remains the restaurant’s one saving grace.”

That was how I felt that night. I am more forgiving now and I hope a return trip will change my mind.

Celebrity chefs in Asia – sigh, so far, their barks have been louder than their bites.

I’ve tried Tetsuya’s many times in Sydney, I can’t wait to check out his Waku Ghin here.