The Crime of Olga Arbyelina 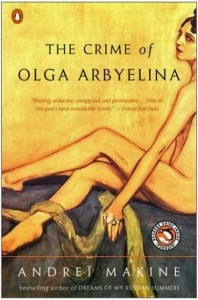 But life is short, and some things are worth it.

Andrei Makine tries to out-Nabokov Nabokov in this story of a woman on an emotional tightwire.

The Crime of Olga Arbyelina is the story of a princess who, during the Russian revolution, fled to France, tending to her hemophiliac son.

The story begins in 1947 in a French village, home to a small group of Russian émigrés. One of the émigrés has drowned, suspected of been murdered, and the prime suspect is the princess herself.

However, the real “crime” is something completely out of left field – her son has been drugging her so that he could have sex with her! What was even more shocking was that she has decided to let him continue his incestuous practice, pretending continued ignorance during the day, and feigning unconsciousness at night during his lovemaking.

Makine’s luminous, hypnotic prose unfolds the delicate situation between mother and son, seen as if through half-closed eyes. The book seems overlong and overwrought at times but the description of Russia on the verge of revolution is gripping and the ending a melancholy shock well worth the wait.