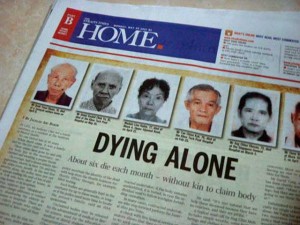 A 76-year-old man who died on April 8 at a welfare home without any kin to claim his body has been identified as Quek Teow Chuan, a former General Election candidate and a founding member of the Reform Party who at one time also belonged to the party’s Central Executive Committee.

His mug shot was among those on the front page of The Straits Times HOME section on May 30 in a news story about the elderly dying alone. (He was not identified as a politician by the paper.)

I don’t know this fellow personally and I’ve never heard of him until that report, but I’m rather saddened to read of old people dying alone with no one claiming their bodies afterwards.

Apparently, there are about six such cases every month.

Especially when I hear of people spending tons of money having funerals conducted for their pet dogs!

What kind of a society have we become?

Please surround my deathbed when it’s time for me to croak.

All of you, hold hands and sing me a sweet lullaby or two as I slip away, you hear?