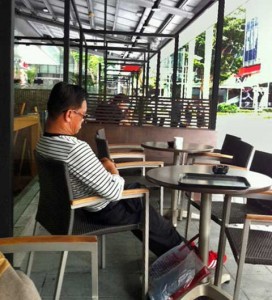 This man had the gall to sit down at Starbucks without buying a drink. He had himself a nice nap for at least an hour.

If you don’t intend to patronize a restaurant would you go and sit at one of their tables?

I wouldn’t do that.

But I notice lots of people doing that at Starbucks Orchard Point.

Most of them are those working at Centrepoint, a stone’s throw away.

These retards not only sit at Starbucks’ tables without buying a drink – they smoke there and some even bring their own drinks bought from somewhere else.

Some of the employees from Robinsons are the worst – those retards in their black uniforms can always be seen parking their fat asses in those chairs set aside for paying customers, chitchatting and smoking and flicking cigarette ashes all over the floor.

Yup, they don’t even use the ashtrays provided.

There are even people who are thick-skinned enough to sit and have themselves a nice nap – like the uncle in the picture above who showed up yesterday morning.

These idiots often deprive paying customers of their seats.

The problem is Starbucks doesn’t seem to care a shit.