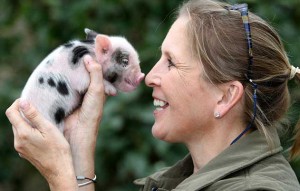 The consumption of pork should be banned!

The number of super intelligent people among us continues to astound me. Yesterday, another letter to The Straits Times (online) FORUM made me brown my boxers again!

This was written by one “Jennifer Lee (Ms), Founder Project: FIN” and it is so very super brilliant it would be a crime if I don’t reproduce it in full:

Say “no” to shark’s fin soup

“The report (‘No more culling of cats in Chong Pang’; June 19) stated that ‘in a suggestion that drew a few laughs, an advocate for shark conservation said government-organised banquets should stop serving shark’s fin soup.’

“Tabled in a light-hearted manner, the suggestion received overwhelming support from attendees. Within two hours, our team spoke to 80 attendees at our booth at the forum, and 60 animal lovers participated in a global photo-mob campaign in support of Assembly Bill AB 376, a proposed shark’s fin ban in California.

“Project: FIN believes the Government can lead by example, through ensuring that only sustainable seafood is served at functions.

“At the forum, a Standard Chartered Bank staff member revealed that the bank has stringent rules not to order shark’s fin at all events.

“Five-star hotel Fairmont Singapore also has strict guidelines on sustainable seafood, and its Szechuan restaurant even dedicated a page in its menu to educate consumers about sustainability.

“These environmental efforts are commendable and can only serve to put brand images in better light. With shark’s fin arousing controversy, its serving at events is quickly becoming a show of ignorance.

“Shark’s fin originated from the Ming dynasty and was accessible only to the emperor and selected members of his court. It was never accessible to commoners and, hence, is not part of our Chinese tradition.

“In Chinese tradition, the sound of words is of great importance. Dishes with auspicious-sounding names are usually served at auspicious events. Shark’s fin in Mandarin, however, is called ‘yu chi’, which sounds similar to ‘fish spike’ or ‘fish thorn’. If tradition is of concern, we should not be serving our guests with inauspicious thorns.

“It is ironic that the fins are actually tasteless. They add only texture to the soup flavoured by other ingredients. At the wedding of one of our members, mock shark’s fins were served and none of the guests noticed the difference until they were informed by the couple.

“Shark’s fin soup was popularised only in the last 30 or so years, and during this short span, shark populations have faced worldwide declines of approximately 80 per cent. Singapore, being the world’s second-largest trading nation for shark’s fin, has great potential of making a positive difference.”

I’ve been eating this evil dish since I was five so Ms Lee has definitely got her facts wrong – the dish has been popular for far longer than “in the last 30 years or so.” Didn’t she herself mentioned something about the Ming dynasty?

She has all her other facts wrong too. Her letter is riddled with inaccuracies, to borrow a phrase from our Ministry of Foreign Affairs.

But I support her.

At the risk of committing “parrhesia” – the ability to speak one’s mind when doing so involves social risk, a term coined by the ancient Greeks, I support her.

And in my passion to support the rare geniuses in our midst, I am more than willing to overlook certain inaccuracies. Indeed, hyper brilliant people like her must be supported to the fullest extent of our capabilities. She loves sharks and cares for them and I salute her. I have a friend who eschews that hideous dish too and if her baby is dying of cancer and the one and only cure is a bowl of that dreaded dish she will deny it to her child because a shark saved is a shark saved, right?  She can always get impregnated and have another child right? I am sure if my friend’s mum is dying and one tiny spoonful of that heinous dish is all it takes to cure her, she would deny her mum that one spoonful, right? People like her would rather be called “ingrate” than allow poor sharks to die, right?

Boy, I can’t tell you how proud I am that we have such people among us.

I also support Ms Lee in calling the Government (yes, spelt with a capital “G”) to get involved so that we can all be politically correct like those self-righteous people at Stanchart and Fairmont.

I firmly believe that for our own sake, our already very draconian government should also ban all other food that are harmful to Singaporeans in the long run – this list surely must include char kway teow (the lard will kill us and cockles too are becoming extinct), char siew (the burnt parts are carcinogic), salted fish (call ME ingrate? Nah, they are not even a part of our culinary culture – emperors don’t eat salted fish and the salt content can make us bald, and you don’t want a nation of Yul Brynners and Kojaks right?), roast pork (sweetheart, do you want fat to line your arteries?), bean sprouts (e.Coli, e.Coli), mooncakes (these are calorie-loaded timebombs, honey, fuck the Chinese tradition), chilli crabs (crabs are becoming extinct for sure at the rate we consume this national dish), fish-head curry (decapitating a fish, how cruel can you get?), roti prata (oily oily ghee, ghee, ghee = death by instalment), pork leg (poor lovely pigs being amputated is not a pretty sight and again the fat will make us drop dead after IPPT tests).

In the end I think we should all drink water, but wait, that’s a scarce resource too, isn’t it?

Ah, Ms Lee, now is the time to practise Urophagia – British actress Sarah Miles has done it for over thirty years, in claiming multiple health benefits; so has former Prime Minister of India, Morarji Desai.

Before I soil yet another pair of boxers, may I quote Kirk Leech to lend some perspective to this whole shebang:

“There are over 400 species of shark. To claim they are on the verge of extinction is headline grabbing, but an inaccurate generalization, equivalent to claiming that all fish are endangered. As with the treatment of geese in the production of foie gras, exaggeration is common place for those who cannot tolerate the cultural habits of others.

“The UN Convention on International Trade in Endangered Species of Wildlife Fauna and Flora (Cites) lists only three shark species whose consumption is subject to regulation – the great white, basking and whale shark. Dr Giam Choo Hoo, the longest-serving member of Cites, has said ‘The perception that it is common practice to kill sharks for only their fins – and to cut them off whilst the sharks are still alive – is wrong…The vast majority of fins in the market are taken from sharks after their death.'”

He’s more qualified than a looney like me to speak on such things.

Ban yoga – it breaks your bones, ban badminton – if’ it’s good, why call it “bad”minton? Hello, a game of goodminton anyone? Ban marathons – people drop dead after marathons. 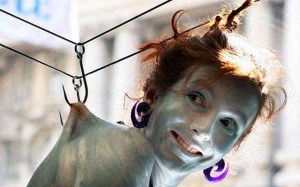 Hong Kong – An actress protesting against shark fishing. She performs with a group called Constant Elevation, whose members specialize in hanging from hooks pierced through their skin. Very good publicity for the group, I’m sure. Now, tell me, who’s exploiting sharks?