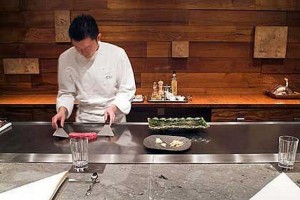 Finally I was able to dine at Waku Ghin and did so on June 26.

At 400 bucks per person I was anxious to see how the experience would go, especially having eaten at Tetsuya’s in Sydney several times.

Tetsuya’s in Sydney is really something – it takes months before one can get a table. Advance reservation at Waku Ghin is also necessary but the restaurant is not your dad’s Tetsuya’s.

Chef Tetsuya Wakuda’s only venture outside of Sydney appears to highlight more of his Japanese heritage than his restaurant in Sydney.

The chef asked if I had any dietary restrictions and after telling him that I eat anything and everything except Jocelyn Wildenstein the dinner began!

Some of his signature dishes are there such as the much-copied Marinated Botan Eibiu with Sea Urchin and Oscietre Caviar (my favorite dish) but forcing diners to sit on high chairs with other diners who are complete strangers and facing a big teppan hotplate manned by a couple of the skinniest chefs I’ve ever come across (genuine, authentic Japanese chefs) – that to me is certainly deliberately done to emphasize “Japanese.”

There are four such teppanyaki booths and it takes a lot of balls to force people to savor a three-hour-dinner on a high chair alongside strangers (trust me, it was very uncomfortable) or the food must be darn good and I am glad to say Waku Ghin hits the spot! But is it original? Nah – think Iggy’s, though there’s none of that foam and molecular cuisine rubbish, thank goodness, and thank goodness none of the chefs tried any silly Benihana antics.

Also, if you have ass luck, you might end up sitting with some really loud and obnoxious retards and this being Singapore, the likelihood of that happening is rather high. Every day, I see retards everywhere. Sorry, Haley Joel Osmen. Don’t forget – the mainland Chinese have just voted Singaporeans the “most disgusting and irritating” people around and a German TV program has just proclaimed Singaporeans “crazy.” 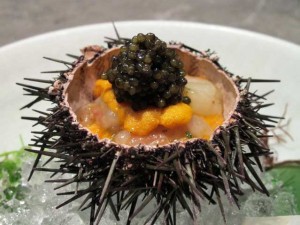 This dish is a winner!

There were some misses the night I was there – for example, Slow Cooked of Barramundi with Summer Truffles was completely tasteless and had none of the aroma and fragrance of truffles. I was reminded of the fake truffles served to me once at The White Rabbit. I was later enlightened by a friend, Wilson Ang, who’s a chef that the aroma of summer truffles is less pronounced, and that they are “naturally tasteless” anyway.) 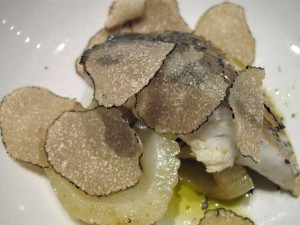 The truffles were tasteless and lacked flavor.

The Japanese Ohmi Wagyu Roll from Shiga Prefecture With Wasabi and Citrus Soy was a complete, utter waste of time. It was a bacon-thin slice of Wagyu rolled up and seared. They referred to that as the “main course” but it wasn’t satisfying at all – it was cold (because it was only seared) and didn’t even look nice. 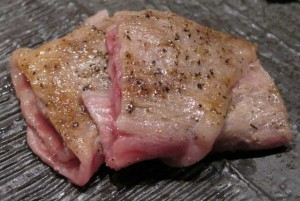 But if you have money to throw because you’ve just replaced another highly-salaried employee with three cheap Indians or there’s someone you must impress, the menu has everything – sea urchin, (albeit tasteless) truffles, abalone, lobster and that famous to-die-for (albeit rather tiny) Ghin Cheesecake. 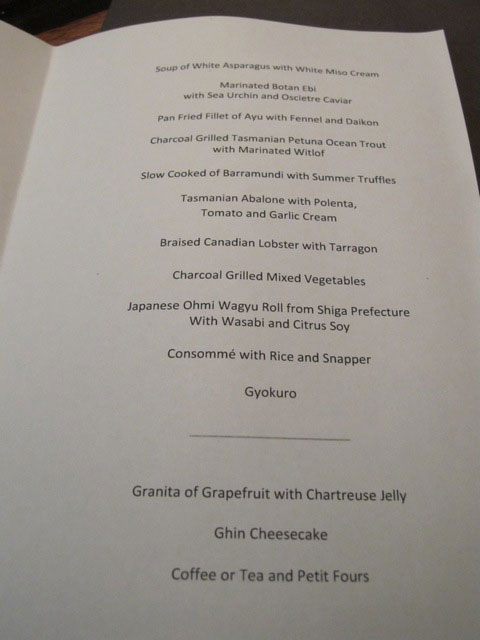