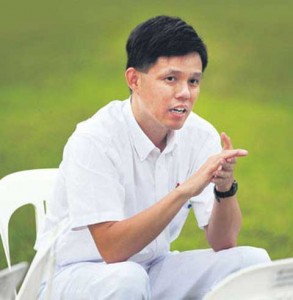 On Saturday, first-time politician Major-General Chan Chun Sing, newly elected into government by standing on the shoulders of Lee Kuan Yew in Tanjong Pagar, (face it, on his own this guy will never ever get elected) urged young people to ask themselves whether their ideas can move the country forward, rather than just “throw stones, cast doubt and tear down institutions.”

Some instances of youth energies “being ill-utilized” during the May General Election saddened him, said the newbie politician.

“They were caught up in the heat of the moment, attacking the Government or attacking the opposition. I want to know…after you attack, do you have better ideas to bring the country forward?” Note “government” with a capital “G.”

Yesterday’s Sunday Times reported that he took questions at a youth dialog, then delivered a “Socratic-style” lecture which “sometimes took complicated detours which went over the heads of the youthful, restless audience…”

Yup, that’s what I actually read – honestly, I couldn’t make such stories up even if I have two PhDs and my name is JK Rowling.

I laughed so hard I actually choked on my toast.

The paper reported also that “he returned often to his conviction that young people must ask less what the Government can do for them and more what they can do for themselves.” Note again “government” with a capital “G.”

Has Chan forgotten that in a democracy a government is of the people, by the people and FOR the people?

Is this a concept that has gone over HIS head?

Does the Major-General think that this is a country under martial law?

I am sure the PAP-dominated government would love to have a zombie-like population of semi-comatose young people who keep their mouths shut, put their heads down and swallow whatever shit dished out at them – the way some of their parents and grandparents were behaving generations ago.

I don’t think it is wrong for young people to be idealistic and to raise questions and criticism even if they don’t have the answers.

I think Chan was being very patronizing and I think Socrates has been severely insulted.

It’s arrogant and condescending people like Chan raking in millions a year who should stop preaching and lecturing and start doing some real serious work (according to their capabilities, of course, and not try to think they are Einsteins when they are more like Borat Sagdiyevs) and try to deliver some tangible results to justify their high pay.

If not, we’re just throwing good money away.

The electorate did not put smug and cocky people in power so that they can scold us.

The electorate must cultivate whatever it takes to puncture the pompous pussbag of absolute power.

May our young people rise to the occasion!

NOTE: I’m beginning to appreciate the local papers for being a great source of entertainment as exemplified by this piece of news late last week about S R Nathan.

The 86-year-old will step down as President of Singapore after his second term ends on Aug 31 2011.

In a two-page statement issued on Friday, he cited age as the main reason behind his decision: “At this stage of my life, I do not believe that I can undertake indefinitely the heavy responsibilities and physical demands of the position of Head of State.”

I usually laugh with my mouth, but this time even my toes participated.

I can’t help it if you are stupid.