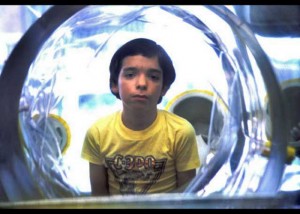 On September 21, 1971, David Phillip Vetter became one of the 50 to 100 infants born each year with Severe Combined Immune Deficiency, a grave condition affecting children who lack a complete immune system. Forced to live in a sterile environment, he became popular with the media as the boy in the plastic bubble because he spent most of his life inside a special bubble-like structure at Texas Children’s Hospital.

The bubble was created as a stopgap measure to protect David just until his immune system could be strengthened via a bone marrow transplant.

The transplant – using his sister’s marrow – eventually took place when little David turned 12 but on February 22, 1984, poor David died from an infection, an unfortunate consequence of the transplant.

I have met many children like David – they live in a bubble – but unlike David who at least lived till 12, these bubble children, as far as I’m concerned have “died” a long time ago.

I know how precious little ones can be and how much we love our offsprings but when we as parents bring up our kids in an isolated, protective environment, we “kill” them.

We kill them by denying them a normal childhood; we kill them by raising them in an environment that renders them fragile, unable to deal with the normal stress of everyday living. (Is this why the suicide rate for youth is so high? The total number of suicides among those aged 10 to 19 years reached a six-year high in 2009, with 19 youths taking their own lives. This is a stark 58 per cent jump from a year earlier when 12 suicide cases among youths were reported.) We kill them when teachers today are afraid to punish kids because they are being threatened of being sued by parents – yes, this is true, a teacher friend of mine once encountered a parent storming into his class threatening to sue him for reprimanding his recalcitrant child.

I have seen little kids “hothoused” – in addition to school, homework and co-curricular activities (in my time we called them – correctly, I might add – “extra” curricular activities), overzealous. young and kiasu parents spend their time driving their children in their BMs – yes, many of these brats have never taken public transport – to participate in uniformed groups (Scouts, Girl Guides, etc), to ballet classes, to violin lessons, to Kiddie Golf tournaments, to private tuition lessons, to cram courses, to enrichment classes, blah, blah, blah. They spend their time using whatever means at their disposal, fighting to get their kids into “elite” schools – they shun neighborhood schools. And can you imagine this? They even send their kids overseas for “exposure” and “immersion” study trips.

When my son, who’s in Sec 3 went with his school delegation to a week’s study trip to China in May, I overheard a parent at the airport wondering aloud if a secondary three student would really benefit from and contribute to such a trip, so imagine my surprise when I hear of kindergarten kids going on similar type of trips.

When I was a kid, I played marbles and I flew kites; I hunted for spiders in the bushes and I caught fish from monsoon drains. I played hantam bola, kuti kuti – there was no Playstation, Gameboy or Angry Birds – and I acquired cuts and bruises that didn’t kill me but instead made me stronger. I made friends with kids from the neighborhood – I had great Malay, Indian and Peranakan friends in addition to my buddies who were ethnic Chinese like me. I didn’t have the luxury of piano lessons or swimming lessons or private tuition, and I wasn’t sent on overseas trips. My parents didn’t organize their lives around my eating and napping times; the entire Loh clan didn’t have to plan their lives around my life although I was the first child and only son of an eldest son – supposedly a “big shot” in the family, by virtue of my birth order (don’t ask me why). When TV was first introduced in 1963, in the entire country of Singapore,  only 2,400 families had TV sets and you’ve guessed it, mine wasn’t part of that 2,400 families so I – and countless other neighborhood kids like me – would stand outside the homes of people who had TV and watched by peering in from outside! Thankfully, those days the haves were rather generous with the have-nots and they didn’t mind us standing outside their doors watching their TV.

No, this is not a lamentation – those were very happy, carefree days. Looking at parents today, I wonder if their children have friends who are not from their own ethnic groups, I wonder if their kids have the right social and life skills to lead normal lives, I wonder if their kids will scream – just as a friend’s child did – when seeing a live chicken for the first time (today kids see only cut-up chicken pieces in supermarket styrofoam packs), I wonder if affluent parents with loads of money to throw will stop thinking that by throwing money away like that, they won’t necessarily bring up healthy, non-neurotic,  non-dysfunctional, mentally sound kids. Instead they may be breeding monsters and little emperors and little dowagers; instead they may be “killing” their kids.

Little David Vetter had to live in a bubble because he had no choice.

You have a choice.

Don’t put your kid in a bubble.

Or else he won’t be able to deal with the real world.