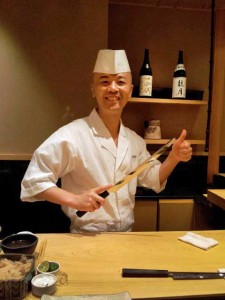 The gentleman posing for my camera is Koichiro Oshino. The master chef is the head honcho at Shinji Kanesaka’s restaurant in Singapore, at the Raffles.

Indeed, Shinji Kanesaka, who has earned two Michelin stars for his Edomae-style sushi restaurant at the Ginza in Tokyo, relies on Koichiro Oshino to bring the magic of the Kanesaka experience to the table. Oshino is assisted by two other chefs, who like him, are completely bald. I don’t think it’s a coincidence. Shinji Kanesaka himself is bald too!

And speaking of tables, Shinji in Singapore is a 15-seat restaurant centered on a table made from a single plank of wood from an ancient Japanese cypress tree.

That is, if you can get in. It can take up to a month to get a reservation. I was lucky to be invited there for lunch yesterday. All those eating there yesterday were good-looking people who won’t bat an eyelid spending beaucoup moola for lunch. I was of course the only person there who wasn’t model material. I was probably also the oldest guy in the room – an increasingly frequent, and rather disturbing phenomenon these days.

There were two single diners – both ladies, one of whom looked like an escapee from a mental institution. There was a couple (they were the first to arrive) – the woman must think she’s Miss Singapore or something (such a shitty demeanor and prima donna attitude, not that she’s anything to look at); there were a few youngish alpha-male investment-banker, yuppie types and there was another couple – the guy was a handsome looking dude and his female companion, rather young, spoke with a phony accent on top of her voice. The entire restaurant could hear her crap. Gosh, why do people have to shout when they talk?

Such is the peril of community dining.

But the food was good: 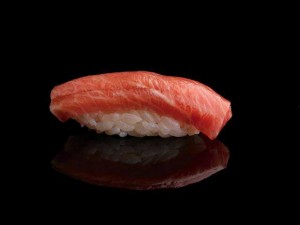 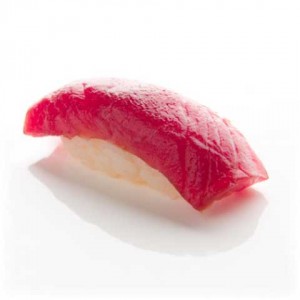 And the prices steep.

Or you can dish out 250 bucks for Omakase Yume. That’s per person too.

No sir this is neither Tsukiji market nor your neighborhood Sakae Sushi!

The food is finer than that of Aoki’s and master chef Koichiro Oshino is a really funny guy; quite a joker, and not a brooding, snarling grouch like Kunio Aoki.

Will I go back?

Sure, just tell me when.

This way I don’t have to put up with pseudo divas and fog horns while I stuff my face with the finest sushi in Singapore.

Indeed, Shinji truly stands out in this warped world of ours, where gambling is called “gaming” and casinos are referred to as “integrated resorts” and any retard can slap a slice of raw fish on a clump of rice and call it “sushi.”