Now why didn’t I think of this? 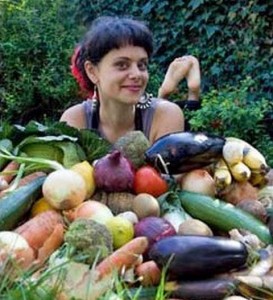 A lady in the UK called Alice Planel collects discarded food from markets and host dinners for people once a month. Her organization is called The Dinner Exchange.

In her own words:

The dinner exchange was set up in London in 2009, its first manifestation: serial, intimate and lavish freegan dinners. Upon moving to London and following the example of different activist networks, I began collecting produce that was being thrown away from different markets. The city’s warehouses and bins seemed to be overflowing with perfectly edible food. More was to be had than could ever feed the large household in which I lived. I therefore decided to host dinners for large numbers of friends using this produce and charge them a small amount in return for the service. The moneys raised were donated to Fareshare, and through Fareshare, used to produce meals for the thousands going hungry in the UK alone. These were intimate and yet raucous events and the feedback was encouraging.

The menu is not available in advance because Planel hasn’t got a clue what food she’ll find for that night. She seems to thrive on the unpredictability of her ingredients, and on bringing waste to the table in a convivial, non-worthy atmosphere. “Food can be nutritious even if it doesn’t look good,” she says with feeling. “It is extraordinary that when we are surrounded by people with limited access to nutritious food we’re dumping so much, often because it doesn’t conform to ridiculous aesthetic ideals.” Her aim is to raise awareness of food waste while also reducing it.