Is this the Way to Treat an ex-president? 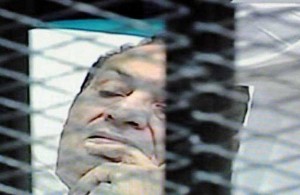 Egyptian air chief marshal Hosni Mubarak has ruled Egypt as president since 1981 but was ousted earlier this year after 18 days of street demonstrations.

Thaksin Shinawatra was elected prime minister of Thailand in 2001 and was in office until he was overthrown by a coup in 2006.

Saddam Hussein was president of Iraq since 1979.  Then the US invaded in 2003. He went into hiding, was caught and eventually hanged in 2006. “Leaked” video clips of the horrendous execution are easily available online.

Apparently in Egypt you could simply amass in the streets and shout down a leader, as in the case of Mubarak.

In Thailand, never mind if you have been democratically and legally elected twice; the king-makers in Bangkok have very creative albeit stupid ways of removing prime ministers. One idiot (Samak Sundaravej ) lost his job because he accepted some money for appearing in a cooking show on TV. I wish Yingluck plenty of luck – the palace’s delay in endorsing her is not a good sign.

As for our American friends, well, the US seems to have the right to turn against their ex-allies, go into any country, grab the leader, and execute him. No wonder the US embassy – like the one in Singapore – is the ugliest-looking fortress in the world and the American Club here needs Gurkhas. If you stop behaving like a thug, you won’t suffer from paranoia. Live by the sword, die by the sword.

I am no worshipper of Mubarak, Thaksin or Saddam. But their fates once more remind me of how dirty politics really is. Once you are out, your fortunes can change very drastically very fast.  You may even lose your life.

For a once-powerful man like Mubarak to be wheeled into court lying in a hospital bed and placed in a cage – that’s so humiliating. Egyptian authorities should have stood on high moral grounds and not resort to such circus acts. Is this the way to treat an ex-president? And while he was in power, why didn’t anyone have the balls to oppose him in civilized, legitimate ways, such as using the ballot box? Throwing shoes at Mubarak’s portraits only after he has been ousted is the ultimate act of cowardice. Honestly, I had expected more from the Egyptians.

Putting an ex-president – even though he might have been a murderer and caused deaths during his rule –  in his sickbed inside a cage in a kangaroo court for a show trial tells me more about the Egyptian authorities than about Mubarak. If Mubarak was such an evil monster as the Egyptian authorities would have us believe, then these ring masters themselves are no better than Mubarak!

But such is life. Such is politics.

One moment you are top dog, the next, you’re just a dog, a rabid caged animal.

Is this why some politicians are so afraid of leaving the stage?