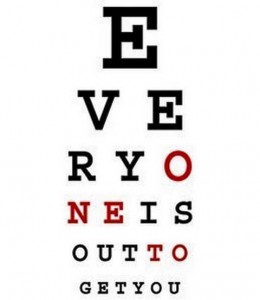 If you are thinking of visiting the Singapore National Eye Centre, think again.

If you are not well, everyone is out to screw you.

If I should get cancer, I’ll get myself a gun and blow my brains out.

The behavior of doctors at our public hospitals leaves a lot to be desired. Read about my bad experience with an orthopedic surgeon here.

Last week I had another bad experience with a young doctor.

Recently my optician referred me to the Singapore National Eye Centre, so I phoned to make an appointment. The lady taking the call was helpful and polite.

Shortly after, I received a notification by mail as well as a text message on my phone asking me to reply “Y” if I was going to keep the appointment. I replied “Y.” Unlike Singapore Airlines it worked!

The appointment was for August 12 at 9:50am at clinic D, 3rd floor, Singapore National Eye Centre. However I was there at 9am. I was assisted by a kind lady at the reception who helped me get a queue number.

I waited and soon after was ushered into room 22 for an evaluation. It was carried out professionally by a staff and was over in a few minutes. I was then told to wait.

Next I was examined by a senior consultant in room 17, a young Chinese doctor. He was brusque, impatient and ill-tempered and had zero bedside manners. He was also rather curt to his staff, chastising them for not filing my referral letter into the file folder. The spectacles I was wearing were prism eyeglasses and he appeared very upset that I had not brought along a pair of glasses without prisms. He then ordered a number of tests for me.

More waiting later I was then called into room 16 – the sign on the door said “Orthoptics” – where a very polite and friendly Indian lady checked my glasses and asked me some questions. She was very cheerful and was the only person in the entire Centre all morning who had a friendly smile for everyone.

More waiting later I was then called into room 20 where a very courteous and professional optometrist tested my vision.

I was then told that the senior consultant would see me again and the waiting time could be anything from half an hour to 45 minutes. I was advised that I could leave the clinic for a while if I wanted to.

At 11:45am I made my way back to clinic D and after more waiting was called to see the senior consultant  again. He conducted some more tests on my eyes and again I felt he was rude, curt, brisk and very impatient. He was also loud. At one stage he was practically shouting at me as he examined my eyes. “Look at my ear! Look at my ear! Left! Left! Left! Right! Right! Right! Right is here! Right is here! This is right! That is left! Keep quiet! Don’t talk!” He even touched my head to push it down and touched my chin to jerk my head up. As a medical professional, he exhibited a complete lack of appropriate deportment.

He then told me – after I’ve asked him – that he did not see any sign of glaucoma or cataracts but that if I should see “floaters” especially with my left eye, it could be a sign of retinal detachment and if that should happen I would have to quickly rush to hospital for emergency surgery.  Once again he muttered that I should have brought along an earlier pair of glasses – one without prisms. He told me that he didn’t think prisms are necessary and wrote me a new prescription and told me to come back in two months.

Half a day gone – door to door the entire experience lasted some six hours and I am thankful for the professionalism and courtesy shown by everyone there. I just wished the senior consultant had conducted himself more professionally. That was the only negative.

I was not demanding nor was I expecting any special treatment.

I went to SNEC as an ordinary fee-paying member of the public. Because I appeared to be just another patient, and not some big shot, does that mean that I should be abused?

I worry for those patients who are not so educated. I worry for the senior consultant’s safety too – an uneducated simpleton offended by his manners would be tempted to assault him. If I had been a brash young man in my twenties I would have punched his nose and “re-arranged” his face. The senior consultant should be thankful that he lives in this day and age and not the Singapore of his great grandfather’s time when people were less tolerant of arrogance from the high and mighty and would take matters into their own hands when they felt they have been insulted. He should also remember that patients like me pay his salary.

A message must be sent to healthcare professionals that when a paying patient seeks your service, he or she ought to be treated with a modicum of respect at the very least.

It is unfortunate that of all the people working at SNEC the one person who ought to be a positive role model and had all the influence to do so was the one most unable to do exactly that. I understand that doctors in hospitals are busy but this is no excuse for the senior consultant to behave like a thug when all his colleagues around him were very courteous and polite.

Remember, the stated mission of our health ministry is “to be an innovative and people-centred organization, etc.”

Mission statements mean nothing if people don’t walk the talk.

If you or your family members and friends are considering seeking treatment at the Singapore National Eye Centre, my advice is “please re-consider” because since my visit, I’ve heard similar horror stories from other patients.