Let’s Have Ourselves a Vice President 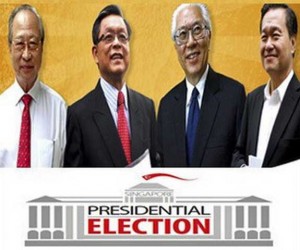 I have previously said that I don’t care if they put a monkey in the Istana.

But tomorrow is presidential election day and I have to vote whether I like it or not. Whether I vote for one of the Tans or an Orang Utan, I would have to vote and that’s the law.

The thing is this: up until now I suspect many people – including a couple of the candidates themselves – are still not clear what the role of the Singapore president is!

I attribute the confusion to what we did back in 1991 when we amended the Constitution to provide for an elected – rather than an appointed –  president. We also added on specific powers in five areas – the president can now exercise limited powers in his personal discretion to block attempts by the government of the day to draw down past reserves it did not accumulate, to approve changes to key appointments, and to exercise oversight over the Corrupt Practices Investigation Bureau and decisions of the Executive under the Internal Security Act and the Maintenance of Religious Harmony Act.

But remember, it is the Cabinet that has the general direction and control of the Government!

Law Minister K Shanmugam has clarified numerous times that Singapore would need to change the Constitution to allow the President to speak whenever he likes and on whatever topic he likes. Indeed the president has no carte blanche to say and do anything he wants!

“The rationale is very simple,” he explained. “You speak as a voice of the government, whichever government is in power and you represent the State. If you get engaged in politics as a combatant, the institution is demeaned. There are very powerful reasons for this approach.”

This is something that Tan Kin Lian and Tan Jee Say don’t seem to understand. Both – especially the very combative Tan Jee Say – have been campaigning as if they were members of parties opposing PAP, both seemed to be running to be Members of Parliament and promising things they cannot do as president.

The debates on the role of the elected presidency tends to shed more confusion than clarity but I refuse to believe that Tan Kin Lian and Tan Jee Say are stupid men. Tan Kin Lian was a PAP member for over 30 years until he quit and Tan Jee Say is a graduate of Oxford. If they are smart, then, trumpeting what they are going to do if elected – when they know fully well that many of the promises they make cannot be kept under the Constitution – would in my simple mind constitute deliberate acts of deception, tricks to win votes, in other words. To me, that’s simply deplorable.

But caught up in the high-voltage rhetoric of frenzied politicking, it is sometimes difficult for people to separate facts from fluff. In the heat of campaigning, candidates’ imagination can run wild. Therefore it is imperative, in this age of spin doctoring, that voters remain vigilant and discerning. Remember, ours is a world where the selfless and the selfish intermingle, a world where Silky Terriers and Rottweilers participate in Annual National Dog Walks side by side.

Tan Kin Lian – those stupid  “high fives” make my hair stand – and Tan Jee Say will not get my vote. Among other shortcomings, both lack savoir faire.

When I vote tomorrow, I must remind myself not to vote for the wrong reasons.

I mustn’t vote Tan Kin Lian or Tan Jee Say just because they are not pro PAP.

I mustn’t vote Tan Kin Lian or Tan Jee Say to “teach PAP a lesson” or “to protest against PAP dominance.”

I mustn’t spoil my vote just because not one of the candidates measures up to my exacting standards of perfection.

That leaves me with Tony Tan and Tan Cheng Bok, the two docs, one a PhD in Mathematics and one a medical doctor.

Both have been PAP men – Tony Tan was even Deputy Prime Minster for 10 years – both have contributed to Singapore and as parliamentarians, both have also participated in the formulation of laws resulting in consequences that have affected us negatively.

Tony Tan is a bit of a dork – with a really creepy hairstyle – often appearing like an automatron with a plastic smile and playacting on stage, regurgitating the PAP party line. And those endorsements irk me, potentially turning the presidential election into a mere horse-trading exercise. That photo in yesterday’s Straits Times of former actress-turned-media-exec Sharon Au hugging Tony Tan is a bloody disgrace! They should have captioned it “PAP’s favorite candidate embraced by state-controlled media, literally.” Then there’s this talk pertaining to his three sons’ national service that refuses to go away.

On the other hand, Tan Cheng Bok appears more like a normal functioning human being though he already look so battle-weary and visibly tired – he’s the same age as Tony Tan, both 71 – and that worries me big time. Touch wood, I hope he won’t do a Albino Luciani on us if elected.

Still, objectively speaking, these two are the most eminently qualified.

Seriously can you really imagine Tan Kin Lian being president? It’ll be a sad day for Singapore if Tan Kin Lian gets elected. And I would say to Singaporeans “You deserve the president you voted for.”

So, who shall I vote for?

It shouldn’t be reduced to a case of choosing between the lesser of two evils.

And if one Dr Tan wins and the other Dr Tan has the second highest number of votes, I propose that we make the runner-up our vice president.

We’ve done crazy things before – like having nominated members of parliament.

And having one of the two Dr Tans as vice president will hopefully reduce the likelihood of our own Albino Luciani from happening.